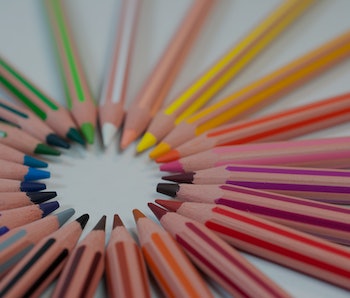 Spring is famous as the season for cleaning, but in my opinion, fall is a better time to get your life in order and get organized. For years, fall is synonymous with binder-buying and color-coding — a time to pack in summer and get to school. Once you’ve reached adulthood, that period of organization doesn’t have to stop. Another upside? You’re stuck with an indoor activity when there’s a chill in the air, instead of when you’re about to finally thaw out.

Studies show that being organized isn’t just something to do because it can make you feel like you’ve fulfilled some sort of status quo. When a home is filled with clutter — academically defined as “an overabundance of possessions that collectively create chaotic and disorderly living spaces” — the emotional definition of home becomes compromised. That makes sense when you consider the sense of attachment people have to physical possessions and spaces. If one views those factors as an extension of the self — and in turn, that self is defined by clutter — then how they view themselves will likely be negative.

Back in January, when everyone seemed to be watching Netflix’s Tidying Up with Marie Kondo, I spoke with Joseph Ferrari, Ph.D., a psychology professor at DePaul University who studies procrastination, the meaning of home, and how those concepts intertwine. He gave it to me straight — clutter is never a good thing.

“People ask me about the positive side of clutter,” Ferrari revealed, “and I say, ‘There isn’t any positive side.’”

Clutter at the office isn’t much better. In January, Ferrari and Catherine Roster, Ph.D. published a study in the journal Environment and Behavior. It was centered around a survey of 290 American office workers, and was the first to examine clutter as a physical stressor in the workplace. In turn, Ferrari and Roster determined that clutter is both a physical stressor and something that’s created by stress.

“We found that emotional exhaustion can leave a person feeling drained and overwhelmed, which creates the tendency to delay decision-making,” Roster tells me. “When decisions get delayed, unattended tasks and piles of paperwork take the form of physical clutter. The clutter then becomes a physical environmental stressor — and creates its own set of negative consequences, including psychological distress, strained relationships with others in the workplace, and loss of productivity and control over personal work space.”

She describes it as a “vicious cycle” and, while more evidence is needed to say for sure, says that it seems reasonable to assume that, in the midst of that cycle, physical clutter promotes greater levels of emotional exhaustion, which perpetuates the problem.

So what is there to do? First, it’s important to recognize if you are a procrastinator. In another of Ferrari and Roster’s studies, they determined that general procrastination tendencies may “enable a lifelong pattern of responses to one’s environment that become increasingly maladaptive throughout the life cycle.” In other words, if you’re a procrastinator now, it’s only going to get worse.

That’s why, even if you’re still emotionally exhausted from what drove your clutter, it’s important to act on it. Roster notes that, while things can feel overwhelming and we can’t always attend to the “barrage of ‘incoming missiles’” coming our way, it helps to at least categorize them in some way, so that they are all associated with the same task or event.

“Good organization skills can enable a person to at least feel that they are filing objects in such a way that they can look at related documents and tackle these as time permits,” Roster explains. She argues that if one simply continues to pile things, they’re creating an even greater task that they’ll eventually have to face — which is sorting through those big piles.

Meanwhile, Ferrari says that when it comes to sorting through our personal possessions, it’s important to keep it real with ourselves. How many pairs of pants do we really need? How many commemorative mugs; snow globes? Your answer now could very well be different than your answer was five years ago. That past person isn’t living in your house, you are — and it’s time to give yourself a space you’ll enjoy.