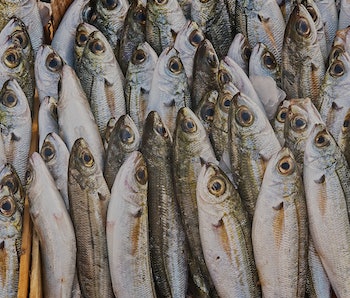 The problem starts at the bottom of the aquatic food chain: All types of algae, those fuzzy underwater plants like seaweed, pond scum, and algal blooms, are all feeling the heat from global warming, and humans may suffer for it, new research shows.

Algae are small but mighty, responsible for synthesizing most of the world’s docosahexaenoic acid (DHA). The plants provide DHA to fish and sea creatures, many of which end up on the plates of seafood lovers everywhere. But algae are particularly sensitive to changes in ambient temperature — and warmer waters have already started disrupting algae’s DHA synthesis.

A new study, published Wednesday in the journal Ambio, predicts that by 2100, 96 percent of the global population may not have sufficient access to a DHA, the naturally occurring essential brain-building omega-3 fatty acid. That’s the worst-case scenario, if global warming continues unabated. The researchers estimate a global loss of ~10-58 percent of the world’s DHA in the next 80 years.

Also read: Scientists Reveal One Supplement That Helps Depression More Than Others

DHA is a key component of cell membranes and is critical for brain function. It helps regulate cell survival, inflammation, and neuroprotection, and makes up 10 percent of the mammalian brain’s fatty acids. DHA is also thought to help develop the central nervous system and retina. New research says DHA and other types of omega-3s may help people suffering from depression, if taken alongside antidepressants. DHA is especially helpful for fetuses, babies, and young children for developing healthy brain and eyes.

But humans can’t produce enough DHA on their own. To reach the recommended dose — 1.1 g for adult women and 1.6 g for adult males daily — they either have to eat DHA-rich foods like fish and seafood once or twice a week, or take dietary supplements.

As DHA production declines and human population explodes, humans all over the world will likely become DHA deficient. Basically, too many people and not enough seafood will lead to health complications. On top of global warming, our seas and fresh water bodies are dangerously overfished, making DHA more scarce — a third of the world’s fish stocks are fished at unsustainable levels, according to the Food and Agriculture Organization of the United Nations.

Certain places and people will be harder hit than others: Freshwater bodies would suffer the omega-3 crisis more than oceans or seas, because they are predicted to experience more extreme warming.

People living in countries with large fish production and fewer people, such as Greenland, Norway, Chile, and New Zealand would still be able to consume the recommended dose of 100 mg per day. But other people in places like China, Japan, and Indonesia as well as all countries in Africa, excluding Namibia, could shift from producing an excess amount of DHA to falling below the threshold for the recommended dose by 2100.

Shortages may be mitigated by international trade but vulnerable communities may not have the same financial ability to ship in supplements or replace fish stocks like other wealthier nations.

The DHA crisis isn’t predicted for a few more decades, so it doesn’t mean everyone needs to rush to the drugstore to stock up on ten bottles of DHA. But it is another reason to curb carbon emissions and reduce overfishing, so that this generations’ grandkids have healthy brains and vision.

More like this
Mind and Body
Jan. 23, 2023
Can spicy food boost our gut health? Here's what the science says
By Katie MacBride
Mind and Body
Jan. 21, 2023
Do detox diets work? A dietician breaks down the murky science
By The Conversation and Taylor Grasso
Innovation
Jan. 16, 2023
An ambitious plan could help repair one of California’s biggest ecological catastrophes
By The Conversation, Robert Glennon and Brent Haddad
LEARN SOMETHING NEW EVERY DAY.
Related Tags
Share: