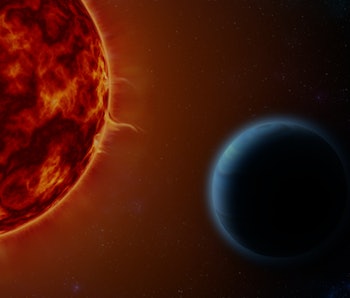 Trillions of miles away from Earth, exoplanets orbit their own home stars. In an effort to glimpse their secrets, scientists on this planet have devised some creative ways to view them. Now, one of these techniques, called transmission spectroscopy, has yielded a breakthrough finding: the element potassium.

As an exoplanet travels in front of its host star during orbit, viewing it from Earth gives scientists a snapshot of the fingerprint that the planet leaves behind on the host’s starlight. A recent study used this technique to identify a chemical element in exoplanets that’s been in hiding for over 20 years by capturing a high-resolution snapshot of a hot Jupiter as it transited by its star.

Hot Jupiters are large, gaseous exoplanets that hold some similarities to our own solar system’s Jupiter, as the name suggests. These exoplanets tend to orbit close to their host stars in shorter periods of time, and their hot atmospheres are known to have elements such as sodium and potassium. However, thick clouds in these exoplanets’ atmospheres make it difficult to detect their chemical elements.

Potassium, although theorized to be present in the atmosphere of hot Jupiters, has never been successfully detected. However, using a high-resolution spectrograph, an instrument that measures the properties of light, a group of scientists finally detected potassium in a hot Jupiter planet, resolving a cosmic mystery.

Klaus Strassmeier, Ph.D., the paper’s corresponding author and director of the Cosmic Magnetic Fields research branch at the Leibniz Institute for Astrophysics Postdam (AIP) in Germany, tells Inverse that potassium may be harder to detect because its changes in energy levels blend in with the lines created by gases around an exoplanet.

“This is a remaining puzzle,” Strassmeier says. “Potassium had been searched for by other colleagues but with inconclusive results.”

In the study, published in the October issue of the Monthly Notices of the Royal Astronomical Society: Letters, Strassmeier and colleagues observed a hot Jupiter around 64 light years away from Earth. Referred to as HD189733b, this hot Jupiter closely orbits a dwarf star that’s about 80 percent the size of our sun, in approximately 53 hours.

In order to detect its chemical elements, the group of scientists used the Large Binocular Telescope (LBT) and the Potsdam Echelle Polarimetric and Spectroscopic Instrument (PEPSI), a tool used for photographing spectra of light, to observe the planet as it orbited in front of its host star for a period that lasted just under five hours.

“If one looks at this with low spectral resolution, one simply misses most of the excess flux,” Strassmeier says. “PEPSI’s resolution at that wavelength was an overwhelming 0.006 nm.”

Different molecules and atoms in an exoplanet either scatter or absorb the starlight of the host. By analyzing the spectrum of light from the star, the scientists are able to identify the fingerprint that the chemical elements in a transiting planet’s atmosphere leave on the stellar spectrum.

The observations detected potassium in high resolution in the layer of atmosphere above the hot Jupiter’s clouds for the first time. The same tools can be applied for future studies to help better characterize exoplanets that exist far off in the universe.

“It will motivate the search to find other elements in exoplanetary atmospheres…in order to characterize them and understand their formation and evolution,” Strassmeier says.

Abstract: In this work, we investigate the potassium excess absorption around 7699 Å of the exoplanets HD189733b and HD209458b. For this purpose, we used high-spectral resolution transit observations acquired with the 2 × 8.4 m Large Binocular Telescope (LBT) and the Potsdam Echelle Polarimetric and Spectroscopic Instrument (PEPSI). For a bandwidth of 0.8 Å, we present a detection >7σ with an absorption level of 0.18 per cent for HD189733b. Applying the same analysis to HD209458b, we can set 3σ upper limit of 0.09 per cent, even though we do not detect a K-excess absorption. The investigation suggests that the K feature is less present in the atmosphere of HD209458b than in the one of HD189733b. This comparison confirms previous claims that the atmospheres of these two planets must have fundamentally different properties.