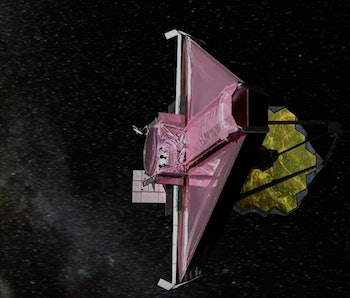 NASA has been working on the James Webb Space Telescope, an extremely powerful device which will succeed the beloved Hubble, for more than two decades. Now, after all that time and effort, it’s almost finished, and the launch date seems like it’s just around the corner. It’s great timing, because as NASA astrophysicist Amber Straughn explained during a recent lecture, scientists just made a discovery that seems tailor-made for Webb to investigate: Trappist-1’s seven potentially habitable planets.

Webb, which is looking like it will launch in late 2018, improves on the Hubble in countless ways. From its position about a million miles away from Earth, the telescope will observe near-infrared to the mid-infrared light, allowing it to peer deeper into space (and further back in time) than we’ve ever been able to see before. Also, it’s huge.

Like Hubble, Webb is going to have a pretty broad mission with lots of different scientific goals. Straughn explained that, since Webb can see much deeper into space and observe older stars and galaxies than its predecessor, it will try to unlock the secrets of the mysterious reionization period after the Big Bang. The most exciting thing that Webb will study, Straughn admitted, is exoplanets.

Right now, most of our knowledge of exoplanets is limited to transit spectroscopy, a process where scientists learn that these planets exist by observing how much the light cast off by their star changes when they pass in front of it. Webb’s enhance capabilities will allow scientists to do one better: transmission spectroscopy.

“We want to watch these planets orbit in front of their star, watch the starlight pass through their atmosphere, and learn about atmosphere composition from that,” Straughn said.

We haven’t been able to do this well until now because the technology is extremely advanced. Also, as Straughn explained, it’s very, very hard.

“Stars are bright, planets are tiny, and their atmospheres are minuscule,” she said. Those challenges make the discovery of the Trappist-1 system a gift for Webb.

“It’s the perfect system,” Straughn said. “It’s a little tiny, faint star, and a bunch of planets, three of which are solidly in the habitable zone.”

NASA is still working hard on Webb. They’ve invested $8 billion into Webb over the decades, and the telescope can’t be serviced once it’s up in space, so everything has to be pretty much perfect.

It will be worth it, though, if Webb unlocks some world-changing information about Trappist-1. Or, perhaps, makes some other totally unprecedented discovery.

“I think the most exciting thing about these big bold missions are the answers to the questions we haven’t even thought to ask yet,” Straughn concluded.

More like this
Science
21 hours ago
Behold! 9 glorious Neptune images reveal our changing view of the planet
By Jennifer Walter
Science
Sep. 20, 2022
NASA discovers a problem with one of the Webb Telescope’s most important instruments
By Doris Elín Urrutia
Science
Sep. 21, 2022
Wow! Webb just gave us the best look at Neptune in 33 years
By Kiona Smith
Related Tags
Share: