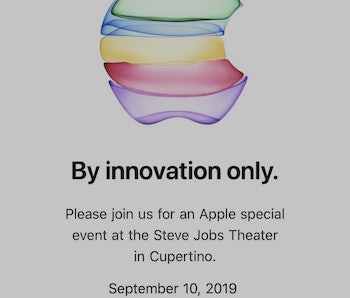 Today’s the day: Apple is set to take the wraps off its next iPhone, one of the most widely-anticipated events on the tech calendar.

The iPhone 11, the rumored branding for the next device in the product line, is set to make a number of welcome changes. Reports suggest the device will feature a triple-camera array, designed to take better photos and ensure the whole subject fits in the frame. Other expected changes include a faster processor, better waterproofing, a reversible wireless charging system and better low-light photography — the latter of which could help Apple take on the Google Pixel.

For the smartphone that brought smartphones to the mainstream 12 years ago, the annual event is a big moment for technology.

iPhone 11 Event: What to Expect for iPhone, Apple Watch, Apple TV and More

Other changes include better waterproofing. While there’s little indication for what benefit it could bring, previous improvements to the Apple Watch enables swimming workouts. Bloomberg reports it will move from the current rating of around 30 minutes in the water to around several hours.

It’s not all big news. Apple is expected to drop the pressure-sensitive 3D Touch screens from the lineup, a change that came to the iPhone XR last year. The pressure-sensitive displays debuted on the iPhone 6S four years ago, but are expected to be phased out in favor of long presses on user interface elements to activate the same functions. This includes holding down on the flashlight button to change the brightness. Fans have decried the change as “devastating.”

One of the benefits of removing 3D Touch could be a stronger phone that breaks less when dropped. An April 2018 note from analyst Ming-Chi Kuo suggested the company would remove the feature in favor of a “Cover Glass Sensor” that protects against shocks, a feature that raises the display’s price by 15 percent to $26. Removing 3D Touch is partly a cost-saving measure to fund this new technology, Kuo explained.

Beyond the iPhone, Apple is expected to make a number of updates to the Apple Watch and Apple TV lineups. On the watch side, code inside iOS 13 suggests new titanium and ceramic casings may come to the lineup. While ceramic featured on the third-generation Apple Watch Edition, light-but-strong titanium has never featured on an Apple Watch. The company has used titanium before: the PowerBook G4 laptop in 2001 earned the nickname “TiBook” due to its use of the material, and the Apple Card also employs the material.

In terms of software, Apple may also reveal the final release dates for iOS 13, macOS Catalina, watchOS 6 and tvOS 13.

Apple leaker CoinX also teased on September 4 that Apple may have “one more thing” up its sleeve. The famous line, typically employed by Steve Jobs at the end of an event, is traditionally used to unveil one more unexpected product. Could Apple have a big surprise on the way?

iPhone 11 Event: How to Watch

Watching along is simple. Apple has set up a special events page at Apple.co/live. Alternatively, watch the event via YouTube below:

If the below video doesn’t work, try following this link.

More like this
Gear
Jan. 24, 2023
Arc browser for iPhone is bringing skeuomorphism back (kind of)
By Raymond Wong
Gear
Jan. 24, 2023
How to use FaceTime's magic eye contact feature in iOS
By Alyson Velati
Innovation
Jan. 28, 2023
The 5 best mini projectors for iPhones
By Debbie Lee
LEARN SOMETHING NEW EVERY DAY.
Related Tags
Share: