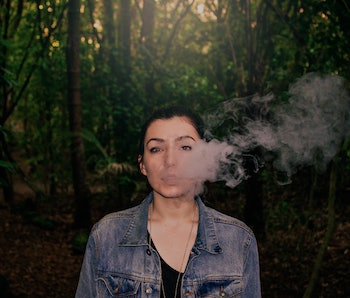 Cigarette smoking rates among young Americans have hit historic lows, but that doesn’t mean their nicotine use is slowing.

E-Cigarettes have been embraced by millions of teenagers, and experts suspect the increase is linked to the idea that vaping is not as dangerous as cigarettes.

Scientists reported this week on the connection between e-cigarette use and problems sleeping. Much like combustible cigarette smokers, e-cigarette users slept worse than non-users. This held true even for those who did not vape daily. Their work was published Wednesday in the Journal of Sleep Research.

Furthermore, e-cigarette users reported greater use of sleep medication than traditional cigarette smokers. The study’s authors — researchers from Oklahoma State University, the University of Missouri School of Medicine, and the Ohio State Comprehensive Cancer Center — hypothesize that this could be because e-cigarette users are actually consuming more nicotine than cigarette users, because of how easy their devices are to use and the decreased likelihood that they’ll be impacted by smoking bans.

Overall, the participants reported consuming an average of 4.1 alcoholic drinks per week and reported an average global sleep score of 5.8 — a score that shows “overall poor sleep quality.” While that score is in line with prior research documenting “clinically significant sleep problems in college student populations,” the scientists found a specific link between those who smoked and those who suffered from bad sleep.

Those who never used nicotine products of either type reported fewer sleep disturbances — like bad dreams and waking up in the middle of the night — as well as decreased daytime dysfunction and overall better sleep quality.

Meanwhile, non-daily users of e-cigarettes were still using more sleep medication than never-users and reporting worse sleep quality and fewer hours slept — even after the team controlled for alcohol use. The authors note that this suggests that “even such occasional exposure to nicotine may contribute to the development of disruptions in sleep.”

Previous research determined that cigarette smokers are four times as likely as nonsmokers to report feeling unrested after a night’s sleep. Because nicotine is the primary mechanism by which smoking negatively impacts sleep, the idea is that the nicotine in e-cigarettes could be driving the poor sleep reported by vapers as well — but the scientists note that more research is needed to bolster that connection.

“Given that poor sleep and substance use, including e-cigarette use, are both common among college students, understanding how e-cigarette use may impact sleep is crucial given its association with numerous health concerns,” lead author Emma Brett, a clinical psychology graduate student at Oklahoma State University, explains. “Since we found that even nondaily use of e-cigarettes was associated with worse sleep health, this may be a useful target for prevention and intervention efforts.”

Prevention and intervention, Brett and her colleagues note, hinge on whether young people realize e-cigarettes come with a cost. While 50 to 85 percent of young adults between the ages of 18 and 30 agree that regular use of smokeless tobacco or traditional cigarettes comes with great risk, just 16 to 28 percent of the same population think e-cigarettes put users at great risk as well.

Evidence suggests that is not the case, regardless of popular opinion. Meanwhile, what’s certain is poor sleep can lead to poor health outcomes, including higher blood pressure, increased likelihood of gaining weight, and depression.

More like this
Mind and Body
6.16.2022 6:16 PM
Beer might actually improve gut health, study finds
By Elana Spivack
Mind and Body
6.15.2022 7:51 PM
A single gene could stump a deadly parasitic infection
By Allison Parshall
Mind and Body
6.21.2022 10:00 AM
What is hybrid immunity? Two experts explain the mix of vaccination and infection
By Grace C Roberts, Lena Glaser and The Conversation
Related Tags
Share: