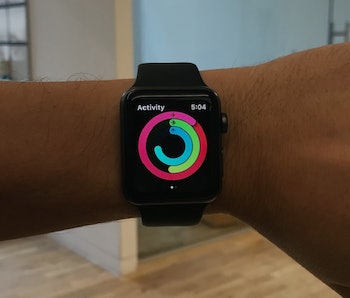 If you’ve never noticed this before, you’ll notice it now: the haggard-looking jogger running tight circles around the block, eyes glued on a fitness watch. I, too, am guilty of running in circles in a parking lot to pacify the little mileage counter on my wrist and hit a nice round number — preferably one that ends in a zero.

I confided this revealing fact to Kunter Gunasti, Ph.D., a professor at Washington State University who studies consumer decision-making. He told me that we have an “obsession” with attaining round numbers: in exercise, in salaries, or in airline loyalty programs.

They’re so alluring for one reason: they tend to make us feel like we’ve earned, accumulated, or accomplished more than if we hit a non-round number. In this case, 20 is better than 21.

A version of this article appeared as Inverse’s Strategy Newsletter. You can sign up for Strategy here.*

“There have been studies done showing that people try to reach round numbers,” he tells me. “Depending on which scales you focus on, you either feel really accomplished, like, ‘I burned 200 calories today, I feel great!’. Or, you feel like you only did 48 push-ups today — so you feel like you fell short [of 50].”

These round numbers influence our sense of accomplishment, but overall, there’s nothing truly special about them. In fact, they are all just scales: miles, steps, rewards points. “It’s so arbitrary — it’s something that marketers, firms, or policy makers could manipulate relatively easily,” he says.

And if those marketers, firms, or policy makers can manipulate those numbers to make us feel a certain way, we can, too.

Round Numbers and the Feeling of Progress

Gunasti’s work illustrates that something as basic as a round number plays a role in how we feel about our efforts to hit goals, like the desire to lose 10 pounds or run 15 miles per week. Hitting a round number target makes us feel like we’re making more progress towards that goal, even if we’re not quite there yet.

Gunasti demonstrated this in several experiments. In the first, he told 140 Canadian workers to evaluate the progress of a fake worker named John, who had the goal of making US$640, which, at the time, was about C$865 (Canadian Dollars) in one month.

In the “low progress” condition, people believed that John had made significantly more progress toward his goal because he had hit a round, C$200 benchmark, compared to when he hit the non-round number — $146 US — even though the value was the same.

“People might be really happy to get $2,000, but when it’s in Canadian dollars, it doesn’t correspond to a round number so people feel dissatisfied or less accomplished,” says Gunasti.

Gunasti’s experiment lays the foundation for the concept that round numbers can influence how we feel about numbers generally. And he showed that this pattern held when people weren’t saving money, but instead, were saving arbitrary units, like airline miles. Again, in the “low progress” condition, when Jim reached round targets, 1,000 miles for example, people perceived that as more progress than a non-round number.

The trials of John and Jim revealed that round number benchmarks tend to hold a special significance — even when they’re completely arbitrary. But Gunasti adds that there are ways to use this for good.

Using Scales in a Motivational Way

In his paper, Gunasti argues that round numbers exert their effects on “perceived accomplishment,” which is how we feel about progress toward a goal. And those feelings play important roles in how we continue to strive toward our goals. Earlier studies on weight loss indicate that accumulating progress toward a goal increases the motivation to keep making progress.

Gunasti’s experiments found that the effects of round numbers were only significant in the “low progress” conditions. When people were narrowing in on a goal (in the high progress conditions), the numbers didn’t seem to matter.

“If you have set up a target already, the effect seems to diminish as you’re getting closer to the target. The effect of round numbers is not as strong. If I set up to do 100 push-ups, there doesn’t seem to be as much difference as 98 or 92 because I’m already close to 100,” he says.

In other words, when we’re on the one-yard line, we don’t care about numbers, because the taste of victory is so close. But at the earliest stages, when we may be making “low” progress, (sometimes insignificant progress), picking a scale that allows you to reach round numbers may make you feel like you’re progressing faster.

“If you ran 4.7 miles, maybe it corresponds with a round number on some different scale,” Gunasti suggested, and it wasn’t hard to find one.

We Shouldn’t Be “Slaves to Decimals”

Gunasti warns that we shouldn’t be “slaves to decimals.” It feels insane to let a tiny dot on a screen determine your mood. And as interesting as it is to track every intimate detail of life, it can feel easy to be shamed by a step counter or a fitness watch (as I write this, my training status is “unproductive.”). But getting 9,900 steps per day isn’t a tragedy; it’s actually still very beneficial.

The healthiest thing is probably just to let it go. “We can go a little bit crazy trying to reach these round numbers, he adds. “We shouldn’t take them for more than what they are.”

But for those of us who would otherwise be running circles in a parking lot, his research points toward ways we can best use this round-number obsession to our advantage.

Have you seen the cool prizes we’re giving away this month? Subscribe to Inverse Daily and read each day to increase your rank.

Here’s Some New Wallpaper for Your Brain

Thanks for reading Strategy!

Next week, I’m thinking of counting my mileage in kilometers (like they do in most of the world). I like the idea of that 6.2 miles working out to a nice 10k.

If you have any specific ways you track your own progress that you find motivating, let me know at emma.betuel@inverse.com.

This article first appeared as Strategy, a weekly newsletter. Sign up for free to receive it every Thursday