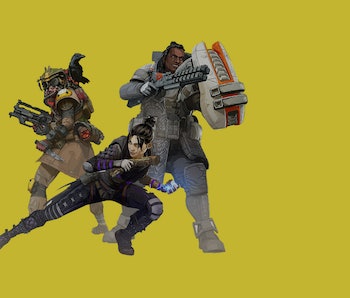 So, Season 2 of Apex Legends is expected to come to a close, as Respawn Entertainment revealed that each season will run “approximately three months,” meaning once October comes around, expect new characters, new weapons, and map changes. And Respawn might have already leaked what it has in store for the next chapter of the battle royale.

During a GameStop conference in Nashville, Tennessee, Apex fans might have caught a glimpse of a rumored new character named Crypto, a shiny new rifle, and additional skins. Redditor /u/Teves3D posted images of the leaks Tuesday, and one detail appears to confirm that these leaks are legit.

While it wasn’t the juiciest leak, Gibraltar Frankenstein inspired look aligns perfectly with an October launch of Season 3.

Halloween-themed updates and events are common among online titles, like Overwatch. So expect spookier Apex skins and potentially even creepy additions to the map as a whole.

It’s all but officially confirmed that Season 3 will launch in October.

The biggest reveal at the conference was concept art for the rumored new character coming to the game, Crypto.

Respawn gave fans a glimpse at the new addition the cast in the beginning of the Season 2 launch trailer, by teasing that he was a highly skilled hacker who took down the Disruptor Tower. The footage never revealed the character’s face, but the patterns and colors of his jacket perfectly match the image posted by Teves3D.

The leaked image even lined up with some features in Crypto’s leaked skill set, which was data mined by YouTuber That1MiningGuy on August 14. The GameStop convention image has a small drone in the background, which was one of the three abilities That1MiningGuy was able to dig up in his video.

Here’s a list of the three skills the YouTuber discovered during his investigation:

The final item to be leaked was a new “charged rifle” weapon. A few screenshots of what it will be like to hold the weapon in-game can be seen directly below its profile shot. Not much else is known about the gun, but some hints are present in Respawn’s 2016 title Titanfall 2.

There’s a weapon in Titanfall 2 that also carries the name Charged Rifle and its profile looks identical to the image posted by Teves3D. That could mean that Respawn could simply recycle the weapon from Titanfall 2. Both games run on the same Source engine and reusing assets from pervious games could save developers a lot of time.

If that turns out to be the case, Apex’s new gun will fire laser bursts after taking a second or two to charge up. This will make the rifle ideal for long-range battles but suboptimal for close-quarters combat as its fire rate is lackluster.

There’s plenty of evidence to suggests these leaks are all accurate, but gamers will need to wait out the remainder of Season 2 to get offical word.