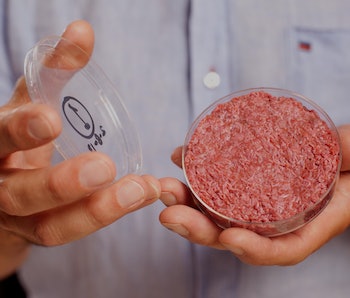 Lab-grown meat could offer a more ethical alternative to traditional meats — and now, thanks to one London-based startup, prices could drop to just $15 per burger.

Multus Media is working on reducing the cost of one of the biggest components of lab-based meat. The technology works by encouraging more animal cells to grow in a bioreactor, but the growth formula used to encourage the cells is usually very expensive, and can involve harming animals.

The team, made up of students from Imperial College London, believe they may have the means to encourage the same cell growth with a cheaper, animal-free alternative. The group is now competing in the university’s Faculty of Natural Sciences Make-A-Difference competition, which will award up to £6,000 ($7,342.50) to the best proof-of-concept prototype.

“Being part of FoNS-MAD is an opportunity to accelerate our work, by giving us access to more specialized lab facilities, academic mentorship and funding,” Cai Linton, co-founder of Multus Media, told Imperial College London in a Friday story.

Lab-grown meat, also known as clean meat, works by taking stem cells from an animal and placing them in a nutrient-rich environment to encourage them to grow. Dutch researcher Mark Post ate the first “clean” burger in 2013, but its $330,000 price placed it far outside the realm of the everyday McDonald’s menu. Research suggests the meat could hit shelves by 2021 with a price tag of $10 per patty — but the nutrients used to feed the cells are expected to be a major factor in the final price.

The winner of the competition will be announced on October 23. Other entrants include GutFeeling, which looks at the link between gut microbes and Parkinson’s disease, and Re-CoLi, which is looking at how to better recycle lithium-ion batteries.

Multus Media has just over eight weeks to demonstrate that it can solve one of the biggest problems with lab-grown meat and pave the way for a more sustainable culinary future.

Lab-Grown Meat: The Race to Remove the Animal

Although the meats are nowhere to be seen on store shelves, interest is developing ahead of their expected launch. Startups have begun discussing future in-vitro foods like foie gras, fish and kangaroo. Aleph Farms’ intricate steaks recreate the texture of a premium beef cut by growing four different cell petri dishes for fat, muscle, blood vessels and connective tissue.

One of the biggest hurdles to growing these cells on a mass scale is the process. Post, the researcher behind the first burger, told the American Chemical Society that “cell culture is not a really efficient process…a lot of our colleagues still think we are absolutely crazy because they say you can’t make this efficient at all.”

The growth serum used to stimulate these cells could be a major stumbling block. The American Chemical Society explained in an October 2018 article that the stuff used to feed the cells could make up around 80 percent of the product’s final cost. Compare that to traditional livestock, which happily grazes on any bits of grass growing naturally on the ground, and you can see the issue.

The serum contains both nutrients and growth factors. These latter components, proteins that stimulate the growth, are hard to find. Blood serum from calf fetuses, while in theory quite easy to find, arguably undermine the purpose of lab-grown meat as it involves killing pregnant cows. Post pledged to molecular science newsletter C2W International that it would never use this techniquie in the final product from his firm, Mosa Meats.

An April 2018 story with Wired noted that the fetal bovine serum industry produces only a tiny amount of serum, enough for the few milliliters required for these early experiments but not enough to support a widespread industry. As analysis from AT Kearney predicted the meats would comprise 35 percent of all global meat consumption by 2040, the industry will need to find a replacement both to earn its ethical credentials and meet those high predictions.

Multus Media could hold the answer. The firm’s culture medium works around genetically-engineered yeast that creates mammalian growth factors. The yeast has been engineered to create the right hormones for growth, while the yeast itself can be used to create an extract with the required nutrients. That covers both areas, and could make the process more efficient.

The race is on to clean up clean meat.

Update 08/29 6 a.m. Eastern time: An earlier version of this article claimed that early experiments required a few millimeters of bovine serum, rather than a few milliliters. It has now been corrected.