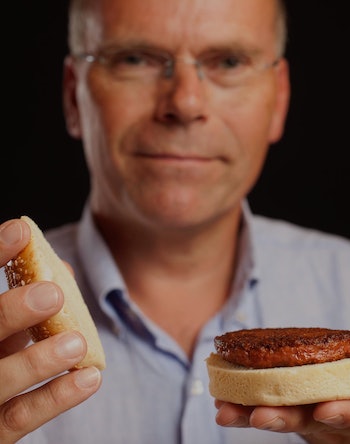 It was a relatively warm Monday in west London, and Richard McGeown was cooking up the most eagerly-anticipated burger of his career. While he was normally used to serving as head chef in a small Cornish restaurant, on this Monday, he had traded small-town life for the glaring lamps of Riverside Studios, the legendary performance venue.

To his left were three waiting guests. Furthest away was American food critic Josh Schonwald. Next to Schonwald sat the Austrian researcher Hanni Rützler. And closest to McGeown was Dutch professor Mark Post from Maastricht University, who had spent the past three months developing the world’s first lab-grown burger.

“I didn’t know that it was going to be that big,” Rützler, the Austrian researcher, tells Inverse.

The idea of lab-grown meat certainly didn’t feel as big in August 5, 2013.

But six years later, lab-grown meat — as opposed to soy or plant-based alternatives like the Beyond or Impossible brands, but actually grown in a lab — is on the brink of breaking out. A July 2019 report claims it could reach $10 per patty, and hit shelves as early as 2021. One consultancy firm predicts that this “in-vitro” meat will account for 35 percent of all meat consumption by 2040.

The meat, grown in a bioreactor from stem cells, could make it possible for meat-eaters to continue their diets without slaughtering animals, and may even help spark an eco-friendly food era where beef is produced in a process with 90 percent less emissions in just two years.

Mosa Meats, the lab meat firm where Mark Post serves as chief scientific officer, has produced an explainer for how it works:

But despite its coming launch, Rützler and Schonwald remain among a tiny handful people of people who know what lab-grown meat actually tastes like. Here’s what they had to say.

Back at Riverside Studios in 2013, Rützler was up first. She asked McGeown to cook the patty in lots of oil, as she knew the cell-based burger contained no natural fat.

As her turn approached, she spotted something that put her mind at ease. The patty was developing a darker surface. The Maillard reaction was taking place, the reaction which creates new molecules at high temperatures. These new molecules create the sensation of umami, or the meaty taste desired by any self-respecting barbecue host.

Around three seconds after it came out of the pan, Rützler took her first bite. Naturally, it was “quite hot.”

“I was surprised that the juiciness, and the consistency was quite similar to a normal patty,” Rützler says. Her biggest takeaway was that it was completely plain. No salt, no pepper , no condiments.

Rützler did note that the team used a ruddy beet juice to give it a red coloring. The medium rare pinkness many associate with a good burger is not a natural occurrence in the lab-grown patty, as there was never any blood pumping through the meat. Adding juices to rectify the coloring is common in Northern Europe, but less so in Austria. Although she could see it, Rützler says she couldn’t taste the red juice during her sample.

Next up was Schonwald. He had already visited Post’s lab in 2009, and the professor told him that lab-grown meat would probably have the consistency of tofu. This was one of the team’s biggest technological challenges, Schonwald says. Fortunately, the final product had a “fine” texture “that resembled meat…certainly comparable to, say, a McDonald’s patty.”

“The 2013 burger tasted pretty good — I was surprisingly pleased,” Schonwald tells Inverse. “My biggest fear going into the taste test was that the texture wouldn’t approach that of conventional meat.”

As with Rützler, Schonwald’s review of this lab-grown burgers was less about the way the burger tasted and more about how it was served. Schonwald noted that he hadn’t eaten a burger without anything on it for around 20 years. Pop on the regular trimmings, Schonwald says, “and you would have a burger that could rival some of the patties at fast food chains.”

“By contrast, I’d say the Impossible Burger — which I like — had a flavor that was slightly off,” Schonwald says. Plant-based alternatives like Impossible Foods and Beyond Meat have made headlines for their creative use of ingredients to recreate the taste of meat, but the lab-grown experiments still taste more authentic.

After Rützler and Schonwald ate their mouthful, it was taken away. Rützler explained that Post’s colleagues, who worked on the burger, wanted to try a bit for themselves.

“So it was really expensive and very exclusive,” Rützler says.

Lab-Grown Meat: Where It Goes From Here

While the general consensus was that it tasted like a regular burger, media coverage noted how both respondents felt the burger was pretty lean. Does that mean scientists need to add fat cells?

Rützler isn’t so sure. It depends on whether the meat is meant to replicate existing burgers, or if it’s okay to make something entirely different. She eats less fat than the average Austrian, regularly asking her husband to cut back, and she notes that culture can play a big role around what people expect from food. On the coloring side, however, she notes that “the expectation is very important for the flavoring” from a psychological perspective, so cosmetic changes like these may be necessary to properly set up expectations.

Schonwald has echoed these sentiments, suggesting that “if the cultured meat pioneers can continue to overcome some hurdles…it could become a formidable rival to both conventionally raised meat and plant-based mock meats.” One of these hurdles includes finding a real consumer benefit. A burger that promises the same great tastes as regular meat, but without the artery-clogging fat, could prove very lucrative.

But the people calling for lab meat to completely replace regular burgers, Rützler says, are “mainly male…and very little of them are culturists.” While an American audience may feel more comfortable with artificial food, Rützler suggests there may be more skepticism in the German-speaking world. She credits the region with birthing the organic movement, notes the cuisine’s focus on “freshness” versus countries like France that prioritize taste, and mentions how journalists were more likely to describe the meal as a “frankenburger” than international reporters.

As the industry develops, Rützler and Schonwald will be remembered as pioneers. Rützler says she “would love to” try some more in-vitro meat, and next year in California she may have the chance to eat cultured fish.

“Future of cultured meat? Bright,” says Schonwald. “I think the incredible success of the Impossible Burger and Beyond Meat suggest that cultured meat has great potential.”

As the product could hit stores in just two years’ time, that potential could be realized sooner than some expect.