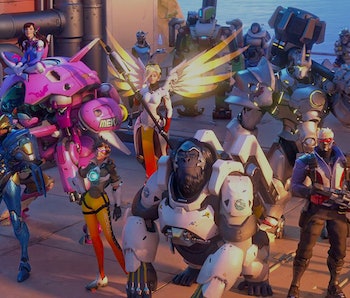 Sigma just joined the Overwatch roster with his gravity-manipulating abilities, but Blizzard’s next hero addition might only be a few months away. But who is Mauga and how will the rumored Hero 32 change Overwatch when he’s released?

The August 13 patch that introduced the game’s latest tank also brought about changes to how Overwatch is fundamentally played. The new Role Queue system now locks players into a role, forcing them to compose their team of two tanks, two supports, and two damage heroes. And that could effect the type of character Hero 32 ends up being.

Blizzard has already dropped some massive hints as to who Overwatch’s next playable character will be, how they’ll play, and even a bit about their backstory. Unless the developers pull something completely new out of their hats, Hero 32 will most likely be someone from Baptiste’s past.

Here’s everything we know about the next chapter of the widely popular first-person shooter and Overwatch’s rumored next hero: Mauga.

Who Is Overwatch’s Hero 32?

There’s strong evidence to believe that Hero 32 will be Mauga, a Talon Heavy Assault soldier and former friend of Baptiste. The burly brawler was introduced in a June 17 short story titled, “What You Left Behind” that gave fans a glimpse of Baptiste’s past life as a Talon operative. The snippet of lore was part of the Baptiste Reunion Challenge, which gave the Haitian healer his Combat Medic skin while dropping massive hints about Blizzard’s next hero release.

This isn’t just speculation, Blizzard fully intended on release Mauga as its Hero 31 but developers felt his archetype didn’t fit the role they wanted to fill. Associate game designer Joshua Noh told Polygon in a July 31 interview that the team wanted to add another beefy shield tank, to compliment Reinhardt and Orisa. Mauga simply didn’t fit the bill.

“We were having a lot of difficulty finding out how he was going to use a barrier, when he’s much more of a close range, berserker, melee kinda guy,” Noh said. So Sigma took his spot.

When Is Hero 32’s Release Date?

It seems that Blizzard has already conceptualized how Mauga would play in-game and potentially even began designing and animating his character model, based on Noh’s statements. That could mean that he could be the third hero to be released in 2019.

Since 2017, Blizzard has released three characters a year in March, July, and November. Sigma came slightly later this year (August 13), but seeing as the Overwatch team apparently put some work into Mauga he could feasibly be made available in late November or early December.

Mauga is depicted as a hulking, hot-headed berserker in “What You Left Behind,” which fits the tank archetype the best. But would Blizzard release another tank right after Sigma?

The Overwatch team has only ever released two characters in the same role back to back once, Moira in November 2017 followed by Brigitte in March 2018. But Mauga’s play style might be so distinct from Sigma that it might not even matter.

Mauga could end up being a big-bodied damage hero with massive burst potential, like Doomfist. But there are currently 16 total damage heroes compared to eight tanks and seven supports, adding another damage hero would further skew the hero distributing towards damage characters.

With the new Role Queue matchmaking system it’s possible that Blizzard will move towards balancing the number heroes in each role.

What Will Hero 32’s Abilities and Skills Be?

“What You Left Behind” even provided insights on what could be Mauga’s primary fire and skillset. Both paint Mauga as an off-tank role that can muscle his way into crucial spots with big damage so his team can follow up.

His weapons of choice are two massive machine guns to spray down isolated foes and enemy barriers, much like Wrecking Ball. The key difference is that Mauga might come with an overheating mechanic. That could mean if he fires his weapons for too long they’ll run too hot and either render him useless or make him take damage.

Here’s a section of the story that mentions his primary weapons and their complimentary coolant tanks:

[Mauga] hefted his pair of machine guns, each as tall as a full-grown man, like they weighed nothing. The coolant tanks on his back gleamed in the scant light.

Mauga might also have access to a unique armor shield that’ll work like a mix of Zarya’s Particle Barrier and Genji’s Deflect. The lore described his shield as only being able to protect him, not his teammates. But it will send enemy rounds and projectiles flying back towards them.

It’s unclear if this shield will have a maximum amount damage that it is capable of being deflecting, like Zarya’s skill, or if it can deflect an indefinite amount of enemy fire, like Genji’s sword.

Here are two mentions of Mauga’s shield in the story:

Quick as lightning, Mauga stepped in front of Nguyen, activating an energy shield…

“Well, color me convinced,” said Mauga, hefting one of his giant guns and activating his shield. He smirked, long and dangerous. Sainclair pulled the trigger twice. The bullets ricocheted off the shield, shattering the panels of the giant French windows overlooking the grounds.

With these two skills in his potential arsenal, Mauga will be a forced to be reckoned with when his guns are cooled and his shield is up. But once he begins to overheat and his shield comes down, he’ll become one giant target.

Much like Winston and D.Va, he’ll be able to plow through enemy lines but without proper follow up from his team, he’ll be a sitting duck. Then again, maybe Blizzard is planning to give Mauga some other mobility skill to boost his Mauga behind enemy lines.

If Mauga is in fact Hero 32, there’s still a lot we don’t know about him. We’ll likely need to wait for Sigma to settle in first before the next new Overwatch hero arrives, and that’s assuming Blizzard doesn’t surprise us with a totally different, unexpected character instead.