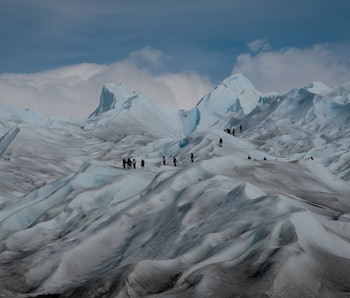 The Arctic’s icy expanses are remote, barren, and relatively untouched by human activity. Or at least, they were. Microplastics, which have been found in the Great Lakes, the oceans, and even human waste, are now a common occurrence in the Arctic. These particles, which are smaller than 5 millimeters across, can come from diverse sources including plastic trash, car tires, and even cosmetics. New research in published Wednesday in Science Advances shows how surprising quantities of microplastics are reaching the Arctic.

In the paper, researchers explain that some of the tiniest microplastic particles found in the Arctic were likely carried north in the atmosphere and deposited by snowfall.

"What did surprise us though was the sheer number in some of the samples."

Melanie Bergmann, Ph.D., a marine ecologist at the Alfred Wegener Institute for Polar and Marine Research and the study’s first author, tells Inverse that her team’s previous research had shown significant quantities of microplastics in the Arctic, but they wanted to explore exactly how these materials make that long journey from human-populated areas.

“One important pathway to the North is likely the thermohaline circulation, the ocean currents that carry plastics from northern Europe or Atlantic up to the North,” says Bergmann. “But atmospheric transport struck us as another strong possibility, since researchers from France, India, and China had recorded microplastic in the air or dust.”

While it wasn’t realistic for Bergmann’s team to set up air filters in the Arctic to collect microplastics from the air for extended periods of time, they did the next best thing: took samples from the snow on ice floes.

Since precipitation is known to carry particulate matter like dust with it, microplastics in the atmosphere could theoretically be found in the snow, even in uninhabited parts of the Arctic. By comparing snow samples from the Arctic to those taken from several northern European cities and the Alps, they observed that the microplastics in the Arctic were smaller and less abundant than those found in cities, but they are definitely there.

Bergmann says they were not particularly surprised to detect microplastics in the Arctic snow.

“What did surprise us though was the sheer number in some of the samples,” she says.

“In one sample from Bavaria, we recorded more than 150,000 particles per liter melted snow,” she continues. “But even though microplastic numbers were lower in the Arctic, the third highest concentration recorded was from an ice floe (14,000 particles) and a mean of 1800 particles for all ice floes is much higher than what we had expected to find.”

Importantly, the team wrote that there may be a large number of microplastics that they weren’t able to detect. Fourier transform infrared imaging, the lab technique they used to analyze snow samples for microplastics, can only detect particles down to 11 micrometers — 11 thousandths of a millimeter.

“Most particles were in the smallest size range indicating large numbers of particles below the detection limit of 11 μm,” they write.

Bergmann points out that this research, which suggests that microplastics are being carried around Earth’s atmosphere, far beyond where they originate, points to a gap not only in the scientific research about microplastics but also in how we think about monitoring air pollution.

Given what we know about the potential dangers of particulate matter in the air smaller than 2.5 micrometers, it seems entirely possible that microplastics are contributing significantly to that global health burden.

“In addition to ultrafine particles and other airborne pollutants we may need to start measuring airborne microplastics, too,” Bergmann says. “In addition, I hope that it highlights that we really need research on the effects of microplastics on human health.”

Abstract: Microplastics (MPs) are ubiquitous, and considerable quantities prevail even in the Arctic; however, there are large knowledge gaps regarding pathways to the North. To assess whether atmospheric transport plays a role, we analyzed snow samples from ice floes in Fram Strait. For comparison, we investigated snow samples from remote (Swiss Alps) and populated (Bremen, Bavaria) European sites. MPs were identified by Fourier transform infrared imaging in 20 of 21 samples. The MP concentration of Arctic snow was significantly lower (0 to 14.4 × 103 N liter^−1 ) than European snow (0.19 × 103 to 154 × 103 N liter^−1 ) but still substantial. Polymer composition varied strongly, but varnish, rubber, polyethylene, and polyamide dominated overall. Most particles were in the smallest size range indicating large numbers of particles below the detection limit of 11 μm. Our data highlight that atmospheric transport and deposition can be notable pathways for MPs meriting more research.