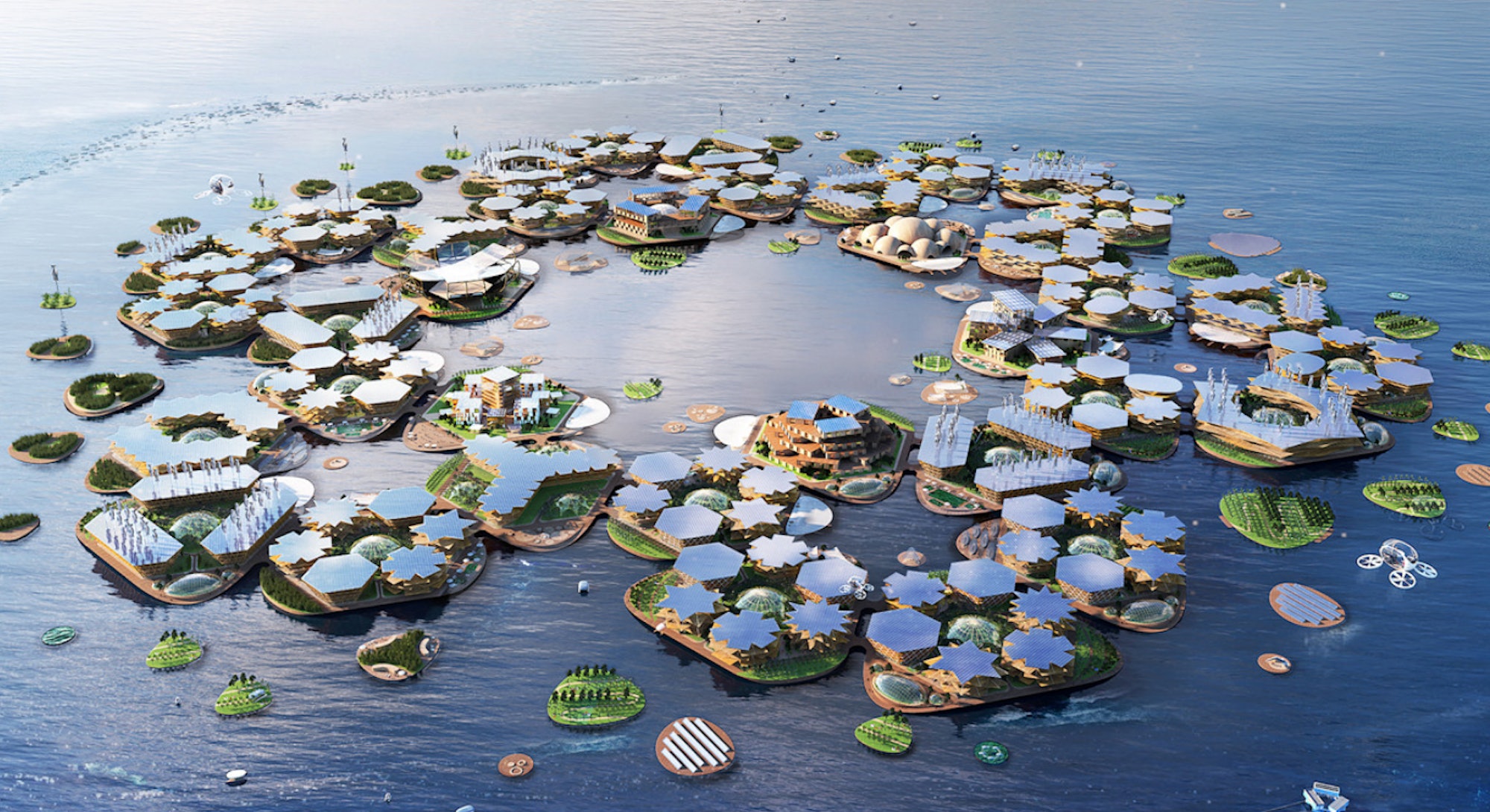 This town is coming like a ghost town,” The Specials once warned[^1].

Unfortunately for the designers of the sort of floating cities we see increasingly rendered in future-focused marketing materials, nobody can quite agree on why people leave some towns in droves.

That could spell disaster for the dream of establishing an ocean-dwelling community. Assuming, that yeah, we’re definitely going to build floating cities, what will keep people there? It certainly won’t be walkability.

The floating city is a centuries-old concept that’s gained media traction in recent years, thanks to a perfect storm of influential interests.

Anybody paying attention to the planet’s worsening climate crisis[^2] might find the idea of a self-sustaining city very good, indeed. The elevated structures could help coastal communities avoid rising sea levels while maintaining their original footprint. Silicon Valley investors are keen to get in on a boundaries-pushing pitch that reinvents something as basic as the city, particularly if it helps them avoid pesky taxes and regulations.

These interests have crystallized into two pitches. One idea, unveiled in April at a United Nations roundtable, tackles the floating city from the perspective of sustainability. Around 10,000 people would live in each city, creating zero emissions and feeding off its own supplies through ocean farming — though it’s reasonable to expect ocean pollution might go up as people drop their trash into the water below. These anchored structures would be chained together one mile from the shore, and could help the one in 10 people that live near a coastal area less than 10 meters above sea level.

Another idea is the Seasteading Institute, which set sail with a $1.7 million investment from Peter Thiel in 2008 (Thiel resigned in 2011.) The institute envisions libertarian-esque “start-up societies,” where people attach and detach from societies as they see fit in a nautical marketplace of ideas. Its plan to partner with French Polynesia in 2016 eventually hit stormy weather, as locals took action against the project.

To Peter Newman, professor of sustainability at Curtin University, a concept like the Seasteading Institute ignores some of the big questions about how communities are formed.

“There’s no guarantee that just because you set up a bit of real estate that somehow or other it automatically will last,” Newman tells Inverse. “These cities take a lot of work to make them run.”

Turns out Field of Dreams was slightly off the mark. Sometimes you can build it and they won’t come.

Floating Cities: How They Could Become Ghost Ships On the Water

History, Newman explains, is riddled with examples of “ghost towns” where designers strove to create the settlement of the future for a future that never fully arrived.

Some planned cities have been great successes. Milton Keynes, a British town designed in 1967 to house 250,000 people, is hailed as a success story[^3] followed by others worldwide. Shenzhen, China was only founded in 1979, on the site of a small fishing village, but today, the region boasts an urban area of nearly eight million people and stands as a monument to China’s lightning-fast economic growth.

But while Shenzhen is hailed as a big success for China, the country also hosts some of the worst examples of ghost towns. Ordos Kangbashi in Inner Mongolia has been rated as the world’s largest, designed to house 300,000 but only ever housing 70,000 before collapsing into obscurity.

Sometimes it’s clear why a city fails. Wittenoom in Western Australia was abandoned for good in 2007 after asbestos emerged as a major health risk. Pripryat was evacuated after the 1986 nuclear power plant disaster in Chernobyl.

In a lot of cases, the answers are murky. Sir Peter Hall, a planning professor at University College London’s Bartlett School of Architecture, wrote a 1,169-page book called Cities in Civilization. The urban tome examines why Detroit became the center of the automotive industry, or how Memphis became a rock and roll heartland, and tries to work out why some cities flourish and others don’t.

Newman has his own theories about why cities fail, which feeds into his criticism of the Seasteading Institute. A community flourishes when people feel like they have a stake in a city, where its growth is tied to their sense of security. It’s a place where you’d want your children to live, for example. Once you feel that way, you contribute to society not just for your own betterment but to improve this stake and work for something broader, something less tangible.

"Part of a community is sharing

“Part of a community is sharing,” Newman explains. He cites Surfers Paradise, on Queensland’s Gold Coast, which started off as a series of resorts and used tax revenue from tourism to build universities and healthcare. “Cities are not isolated individuals.”

Floating cities tout portability and freedom to move your little island whenever you want, but the concept runs the risk of reducing people’s sense of stake in their surroundings. Why should I care about local development, when I can just float off to someplace else?

The glossy concept art for Oceanix, showing people living and working on islands with buildings around seven storeys high, could fade away into a forgotten shell bobbing up and down on the sea.

A Chance to Entrench Inequality?

The ability to move is not necessarily a flaw in the general concept, as people don’t remain in land-based cities just because it’s hard to move. It’s maybe a flaw in the Seasteading Institute’s proposal, which actively encourages people to sever ties if they don’t like their community’s direction.

President Joe Quirk told Inverse in 2017 that “I think our children will be living on floating, sustainable societies, based on the voluntary choices of the people who live there…they’ll look back on our primitive governments founded in previous nation states and wonder why we had to argue between two choices, when they have such a proliferation of choices.”

The Seasteading Institute denies that it’s geared toward libertarians, arguing that any ideology can create its own islands. However, Thiel highlighted seasteading as a means of breaking away from traditional governments to create a space for freedom in a 2009 essay entitled “the education of a libertarian.”

Seasteading may not be an inherently hyper-capitalist vision, but the prospect of setting up an ultra low-tax, low-regulation island does not excite everybody.

"That is not civility, that is just pure greed

“We shouldn’t think that it is a civilizing force,” Newman says. “That is not civility, that is just pure greed. The kind of spirituality that’s underneath it is of complete arrogance, and no consideration for others or for the environment.”

Floating cities employ a number of technologies that could be used for inland cities, like disseminating water for drinking purposes, recycling waste, and even using renewable energy to heat and cool places.

While Oceanix touts the benefits these technologies can provide inland, Newman is outraged that billionaires want to use them to maintain their own gains.

“That’s why I get angry about it,” Newman says. “Instead of being used for [making cities sustainable], they’re being suggested to provide for billionaires to fly in and fly out.”

What’s the Point of a Floating City?

Perhaps a larger question at play is why people should bother with floating cities. Both concepts claim to solve the technology issue, but they don’t seem to have tackled much of the age-old issues about town planning and how to form a community.

“The gee-whiz side of this, that you can, in fact, live on an ocean is true,” Newman says. “But what is what is the purpose of this? And I’d ask the same question about Mars and the moon and so on as well.”

Indeed, astrosociologist Jim Pass has told Inverse[^4] previously that SpaceX’s vision of a Mars city requires some of the community spaces and support found in Earth civilizations. Many concepts of Mars cities, however, don’t seem to offer communal spaces necessary to foster social interaction.

If floating city designers don’t learn from history, they could repeat the experiences of the many ghost towns that came before. It all depends on whether the designers are aiming for a sort of vanity project, or a breathing community that lasts for generations.

“That goes way beyond the kind of technologies that enable this, it gets to the heart of why you want a city to exist,” Newman says.

[^1]: “Ghost Town,” official music video[^2]: Inverse reporting on the climate crisis[^3]: “Milton Keynes at 50,” BBC[^4]: An interview with Pass regarding the idea of Mars colonies