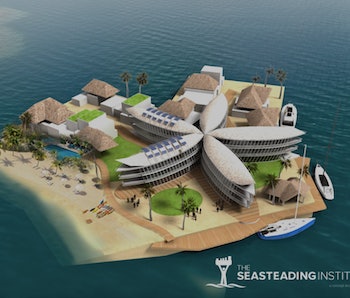 Joe Quirk has a bold vision for the future.

“In mere decades I think our children will be living on floating, sustainable societies, based on the voluntary choices of the people who live there,” Quirk tells Inverse. “They’ll look back on our primitive governments founded in previous nation states and wonder why we had to argue between two choices, when they have such a proliferation of choices.”

Quirk might seem like a dreamer, but he’s well-versed in thinking about floating communities of the future: He’s president of the Seasteading Institute and author of the new book, Seasteading: How Floating Nations Will Restore the Environment, Enrich the Poor, Cure the Sick, and Liberate Humanity from Politicians.

Regardless of Quirk’s experience, it’s a bold proposition, and there are plenty of reasons to be skeptical. Tech billionaire Peter Thiel, who co-founded the Seasteading Institute and still dreams of a libertarian utopia, has cooled on the real potential of floating nations. “They’re not quite feasible from an engineering perspective,” he told the New York Times earlier this year. “That’s still very far in the future.” Thiel launched the Seasteading Institute in 2008 with $1.7 million; by 2011, he’d resigned.

Yet a surprising factor in our future might make the seasteading dream more realistic: sea level rise, which threatens to drown coastal real estate. The wealthy will pay good money to live near the beach, and when the beach is gone, alternative coasts will surely rise.

“The Seasteading insight is that the technology for affordable floating on the ocean is quickly approaching,” says Quirk. “Obviously, it’s much easier to build a house on land than to build a floating house on the ocean, but that’s changing. Material science is getting cheaper and greener.”

The idea that entire communities — even nations — could tranquilly float about as artificial mounds might appeal to residents of small island countries soon to be swept away by rising ocean levels. The washing away of entire states is not just a humanitarian crisis in the making but perhaps more importantly a political one: What happens to the nation state that counts citizens but no land? To whom belongs the resources of the ocean that surround the country that once was?

Indeed, the Seasteading Institute has partnered with French Polynesia for their first experiment in floating life. The Institute has negotiated with the government to create a sort of special economic zone, assuming it can prove that the floating community will provide the environmental and economic benefits it says it can. The plan is to build a platform for a few dozen residences at a cost of between $10 and $50 million by 2020. “It’s definitely important that we create, in this first baby step, a fabulous example of what the future could be, as far as blue tech, and a sustainable floating society,” Quirk says.

If the engineering challenges of floating nations is daunting, the governance challenges are astounding. Quirk imagines a future of “start-up” societies, where people innovate in the area of how to organize and manage people, and good ideas flourish as people flock to the places where things are working.

Yet skeptics might point out that an enormous amount of infrastructure goes into functioning societies, and this is built up over generations, not months. The libertarian types who are generally drawn to the idea of sailing away into the ungoverned high seas may view government as a barrier to business and innovation while remaining blind to the ways it supports it. Who would start a company without liability rules to protect against personal ruin, or patent laws to protect innovation, or property laws that assure that what is yours remains yours, or a dependable justice system to mediate inevitable conflict. Solid regulatory infrastructure can provide a backbone to support risk-taking.

Indeed, it’s not hard to imagine a darker future for life at sea, one that takes the worst of capitalism. Multinational corporations could set up floating factories that strip the ocean’s resources, pollute air and water, and abuse the labor of the most vulnerable people. Author Dan Haight conjures such a world in his novel Flotilla, which follows the life of a young man living in a colony at sea. You might say that these places already exist, in large factory trawler ships. If these entities became untethered from the national regulatory structures that currently bind them, it’s hard to argue that exploitative conditions would somehow be reduced.

But just because the dystopian vision seems frighteningly realistic doesn’t make the utopian vision impossible. Perhaps there is a novel way of organizing people and resources that really can make happier, healthier societies that live in harmony with their environments. Seasteading could provide the platform to stumble on such an idea, and allow it to spread like a beneficial cancer across the globe. Maybe rising seas, the ultimate disruptor of coastal societies, will bring its destruction with a side of hope.

For that future to become a reality, it will take people believing in it — people like Quirk. People will have to believe in it hard enough to pack up their lives and move to Tahiti to try to make a living and get along with strangers, starting from the common ground that they believe in the same thing. They’ll have to believe that the choice is fundamentally different from buying a condo on the beach, and be willing to stomach the additional costs of life at sea, including material costs but also the time and energy of actually trying to build a start-up society.

Will the whole thing dissolve into bitter disagreements? It’s not unlikely. But you’d have to be an utter cynic not to to hope that a better world is possible, and at least quietly cheer on those who believe hard enough to try to build one.