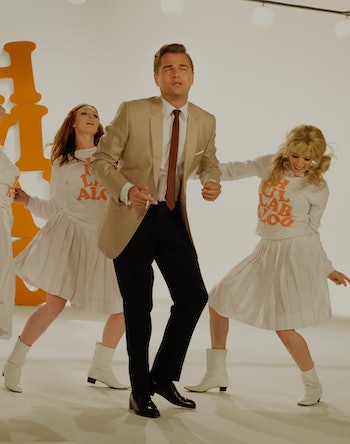 For two days, the Wikipedia page for Once Upon a Time in Hollywood had wildly incorrect plot summary that was so completely wrong that it was hard to tell if it was a troll on an earlier version, a misleading edit by someone associated with the movie, or both.

But the fake plot, wherein the protagonists team up with Bruce Lee to fist-fight the Manson Family, was an indulgent and utterly bonkers tale of an imagined Hollywood that does not, and never did, exist.

That summary, now removed, was fake. But the equally fictitious story you get in the film always feels like the truth.

As the poster declares, Once Upon a Time in Hollywood is the ninth film from Quentin Tarantino. It’s also his best for how bravely sentimental it is compared to his earlier, more cynical efforts, spanning Reservoir Dogs to Death Proof. An aging Western TV actor Rick Dalton (Leonardo DiCaprio) wrestles with his fading star as the world ruthlessly moves on. Supported by his best friend and stunt double Cliff Booth (Brad Pitt), Rick embarks on one last career gamble while his neighbors, Sharon Tate (Margot Robbie) and Roman Polanski (Rafał Zawierucha) live in idyllic L.A. bliss.

Bold and sometimes bloated, Once Upon a Time in Hollywood is an emotional revisionist fantasy of a gritty Hollywood that exists only in the director’s head. Sexism and racism are non-existent (Lee, played by Mike Moh, isn’t cocky because he had to overcompensate as an Asian man on TV, but because he’s an asshole), yet life is still tough for guys like Rick Dalton, a character DiCaprio imbues with gravitas even while he’s flat on paper.

There’s some oddity in DiCaprio as Dalton. DiCaprio is not only one of the most famous actors in the world, but a living, breathing throwback to this very era as well: He’s private, he serial dates fashion models, and his only known passion is environmental activism. Allegedly, the Oscar-winner did not allow the crew direct eye contact with him on set. For a movie that low-key extolls the virtue of humility in a tough business, DiCaprio’s presence carries its own sense of irony, no matter his unparalleled skill.

It’s Dalton we root for, though Pitt’s Cliff is the true hero of the story. Cliff is Rick’s ride or die, a gofer who is happy with his station if it means Cliff can roar down the hills in Rick’s ‘69 Coupe de Ville. (Cliff also maybe killed his wife, a thread that’s never revisited but uncomfortably confirmed by the end.) Their bromance is what makes the movie’s heart beats, but Cliff’s proximity to a falling star nearly comes at a price. While driving Rick’s Cadillac, Cliff gets the attention of “Pussycat” (Margaret Qualley), a promiscuous hitchhiker who brings Cliff within spitting distance of the Mansons.

Gorgeous in the way magic-hour Los Angeles sun can illuminate the exhale smoke of cigarettes, his latest film is a sweet love letter to the memory of a bygone Hollywood. It’s a white-washed memory, though, where the only darkness in Tinseltown is the Manson family, and not the broken dreams of countless artists. But that’s the magic Tarantino wants us to feel, and his eldritch spells are most potent when his film vanishes into this alternate Hollywood.

Frequently, the film pulls viewers into the comfort of a theater, or a living room couch, and lingers there as we watch Dalton in a black and white western, an epic World War II blockbuster, or a humid cop drama. These movies-within-the-movie afford Tarantino to indulge in the style, design, and attitude of the old Hollywood he’s not visited since Jackie Brown.

It’s mind-blowing how much it works. Halfway through, the movie just transforms into Rick Dalton’s new pilot, and that’s the movie you watch until Rick’s hungover ass yells for his line.

Though the cost is to bloat the film, the immersion is incredible.

Coming off back-to-back westerns (in 2012’s Django Unchained and 2015’s The Hateful Eight), Tarantino dissects the genre in retrospect: They were the earliest franchise myth-makers, where actors became heroes with guts, grit, and guns. But the rules of superstardom are different now. We root for the Avengers but pay little mind outside their spandex. Scarlett Johansson in Ghost in the Shell was a critical bomb wrapped up in racial controversy, while Robert Downey Jr.’s last non-Marvel movie was released a full five years ago. And yet Avengers: Endgame is approaching a $2.8 billion box office as of this writing.

Audiences lauded Hugh Jackman for his vulnerability in 2017’s Logan, but in Dalton’s time, heroes were made of iron. His unlucky streak playing losing villains is hurting his career, and we’re led to believe this is his tragedy. He resigns to the coming-end of his career, but the final, touching moments (which follow a blistering explosion of violence) show there’s still time left for his own story.

In the uneven, bizarro ending, Tarantino soars as a transcendent filmmaker. If it were anybody else, they’d be dragged into the fire for misdirecting audience’s emotional investment. But Tarantino nails his premise, however coasting on his defined style and dry sense of humor all the way through.

Played with whimsy by Robbie, who deserves more to do than is afforded her, the movie’s an excuse to indulge in Tarantino’s gaze at Robbie/Tate. (And yes, we see her feet.) But it ultimately pays off when it’s her voice, heard through a driveway intercom, that serves as the film’s through-line, imbuing the movie with a sentimental yet otherworldly chill.

Once Upon a Time in Hollywood is billed as a Hollywood fairy tale, and that’s mostly true. It’s also Tarantino’s own spin on Marvel’s What If…? for a mythology the director believes is the only true mythology.

It’s in this movie that the director, now 56, asks, “What if things were different on August 8, 1969?” What if two of the wrong people happened to be in the right place at the right time? I don’t know. All I know, things would have been different if Bruce Lee were there.

Once Upon a Time in Hollywood hits theaters on July 26.