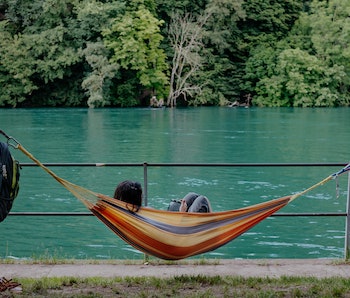 This Sunday, I’m thinking about breaking bad habits. Societally, when we think of bad habits, we typically think of vices like smoking cigarettes or compulsively checking Twitter. But anxiety can manifest as a bad habit, too. How can you break it? You have to uncover your triggers and examine what exactly is going on when you slip into an anxious cycle.

Judson Brewer, Ph.D., the director of research and innovation at Brown University’s Mindfulness Center, acknowledges that people usually pause when they hear that anxiety can be a habit. But research indicates that feeling anxious can be a result of the same reward-based learning process that prompts all habits, positive and negative.

He explained to me that we learn through positive and negative reinforcement, and these link to context-dependent memories. From an evolutionary perspective, it’s easy to see how habits can be a good thing. If we learn what makes us feel good — like a life-sustaining, calorie-filled meal — our brains will tell us to remember what we did to feel good and how to get back that feeling again.

In turn, positive reinforcements likely evolved to help us do things like obtaining food, and negative reinforcements taught us how to avoid danger. Habits form because these behaviors work in a perpetuating loop: There’s a cue, a routine, and a reward. Repeating this loop, over and over, causes something to become a habit.

Brewer explains that when we become worried or anxious about things, that can subsequently lead us to attempt to distract ourselves from the anxiety through an action like checking our phones, or we can start worrying about why we are anxious and attempt to make ourselves stop feeling that way.

"Worrying doesn’t make us feel good, and if we can’t figure out what the problem is, we can become more anxious in the process.

“That worry can actually perpetuate habit loops that make us more anxious,” Brewer says. “Worrying doesn’t make us feel good, and if we can’t figure out what the problem is, we can become more anxious in the process.”

Instead of a salve for our concerns, we get put in a negative reinforcement loop that can spiral out of control. Bad habits, like good habits, are often goal-directed — we’re not always so great at helping ourselves. Studies on pathological worrying show that while we often think of emotions as something that ignites without any deliberate intent, once you worry, that sensation is subject to both habitual and intentional processing. When it’s habitual, our brain becomes biased toward it, and that can develop into a stream of subsequent worries, causing the negative loop to persist. More repetition of this loop can cause the tendency to worry to grow.

So, how can we stop this bad habit loop? It has less to do with forcing yourself to stop the bad habit and more to do with observing your behavior and asking yourself why the bad habit persists. For example, in a 2010 study published in the Personality and Social Psychology Bulletin, researchers found the only strategy that effectively helped people control their habits was “the spontaneous use of vigilant monitoring (thinking “don’t do it,” watching carefully for slip-ups).”

Meanwhile, Brewer’s research on smoking, overeating, and anxiety shows that mindfulness is the key to breaking the hold a habit has on you. This means that while you indulge in the habit, you should engage in a little curiosity. Ask yourself what it feels like to give in to that habit, moment by moment, and how it affects your body and your brain.

Curiosity is a naturally rewarding experiencing as well, and by asking yourself these questions, you can kickstart a different sort of positive loop. You can know intellectually something isn’t good for you, but a trigger can cause you to lose cognitive control. Bad habits are hard to break, but exploring why they have a hold on you and how they affect your life is a step toward stopping the cycle.

This beauty is the creation of Kim Keever, an artist whose process is pouring paint into water and photographing the results through the glass wall of an aquarium. The setup is definitely worth checking out. What results are otherworldly abstracts, both fanciful and odd in a way that makes you want to be in the image.