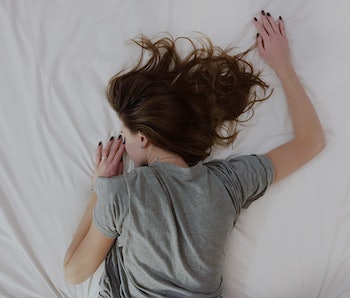 When you stop to think about it, the idea that most mammals lose consciousness for a few hours each night is pretty strange. But sleep’s long evolutionary history serves as a testament to how important it is. Lizards sleep, birds sleep, mammals sleep, and data published Wednesday in Nature suggests that sleep is hundreds of millions of years older than scientists previously thought.

This new study pushes back the evolutionary origin of sleep to somewhere around 450 million years ago. Study co-author Philippe Mourrain, Ph.D., an associate professor of psychiatry and behavioral sciences at Stanford University, bases that claim on his work on zebrafish. According to Mourrain’s work, their sleep patterns indicate that sleep itself may have emerged along with the first vertebrates in the ocean.

“It’s an exciting era which should lead to a broader definition of sleep across all the animal kingdom,” Mourrain tells Inverse. “Our findings hence suggest that sleep patterns may have emerged with the first aquatic vertebrates.”

Even more importantly, those first aquatic vertebrates probably slept in ways that are familiar to humans today.

Based on heart rate, muscle movements, and brain activity in the dorsal pallium — the zebrafish equivalent of the human neocortex — Mourrain showed that when zebrafish sleep, they enter two stages: “slow bursting sleep” and “propagating wave sleep.”

These patterns, Mourrain and his co-authors explain, have clear parallels to human sleep.

"Something that evolved so long ago and persists this long is testament to its importance."

The zebrafish’s “slow bursting sleep” is similar to slow wave sleep, which in humans is the deepest stage of non-REM (rapid eye movement sleep) and can play a role memory consolidation. The “propagating wave sleep” has parallels to REM sleep in humans, which is the stage when vivid dreaming can occur and the body is usually paralyzed.

Because humans and zebrafish shared a common ancestor over 400 million years ago, this work suggests that the creatures that preceded both us and our distant zebrafish cousins had already tapped into the restorative power of sleep.

But the fact that their sleep stages are so similar to ours is especially noteworthy because it shows that sleep follows a similar stage-like pattern across a variety of creatures. For instance, in 2016 a Science study on bearded dragons showed that they also enter REM sleep. The authors of that paper speculated that because the reptiles enter these sleep cycles, bearded dragons may also dream.

That finding, taken together with this new data on zebrafish, says Mourrain, points to the idea that sleep has universal “brain and body signatures,” including sleep stages, that underscore its importance.

“Something that evolved so long ago and persists this long is testament to its importance,” Mourrain adds. “The pervasiveness of these signatures speaks to a core function shared by all animals.”

But we’re still left scrambling to find exactly why sleep has been so important for so long. Mourrain calls that a “burning question.”

"Abuse it at your peril."

Already, we know that sleep plays an important role in learning, as well as mental and physical health. On a cellular level, sleep helps to remodel the connections between neurons, repair DNA, and clear toxins from the brain.

Mourrain’s team’s new findings on zebrafish suggest that sleep is a tool that’s been refined across thousands of species that have lived and died over at least 450 million years. That makes sleep one of evolution’s most powerful gifts, and he hopes that these findings at least drive home that it’s not a waste of time.

“It isn’t [a waste of time] for all other animals, so its not for us either,” he says. “Abuse it at your peril.”

Abstract: Slow-wave sleep and rapid eye movement (or paradoxical) sleep have been found in mammals, birds and lizards, but it is unclear whether these neuronal signatures are found in non-amniotic vertebrates. Here we develop non-invasive fluorescence-based polysomnography for zebrafish, and show — using unbiased, brain-wide activity recording coupled with assessment of eye movement, muscle dynamics and heart rate — that there are at least two major sleep signatures in zebrafish. These signatures, which we term slow bursting sleep and propagating wave sleep, share commonalities with those of slow-wave sleep and paradoxical or rapid eye movement sleep, respectively. Further, we find that melanin concentrating hormone signalling (which is involved in mammalian sleep) also regulates propagating wave sleep signatures and the overall amount of sleep in zebrafish, probably via activation of ependymal cells. These observations suggest that common neural signatures of sleep may have emerged in the vertebrate brain over 450 million years ago.