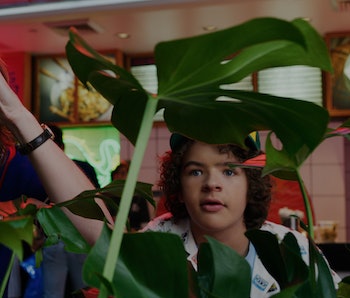 Stranger Things Season 3 delves into Cold War conspiracies by introducing a segment of Russian scientists who also have interest in the Upside Down, and one group of Hawkins characters get mixed up in it when Dustin discovers a “super-secret spy code” via his long-range antennae.

For anyone confused about what this secret code means for Stranger Things, we’ve got you covered.

The big Episode 1 cliffhanger ending is that after all his friends abandoned him, Dustin heard a secret code being spoken over the radio in Russian. He takes the information to Steve at Starcourt Mall where he’s selling ice cream at Scoops Ahoy, and by the end of Episode 2, they’ve befriended fellow ice cream scooper Robin. She’s a whiz at languages, and not only does she help them translate, but she’s the one who cracks the code.

“The week is long. The silver cat feeds when blue meets yellow in the west. A trip to China sounds nice if you tread lightly.”

Steve realizes late in Episode 2 that the song in the background of the message is the same as an electronic ridable pony in the mall. But it isn’t until Robin translates that last phrase the next day — “A trip to China sounds nice if you tread lightly.” — that she realizes that all of these code phrases correspond to places in the mall. The Russians are using code words to smuggle technology and other supplies into Starcourt so they can use them at their secret underground base.

“Silver cat” refers to the delivery company, who delivers real supplies to Scoops Ahoy and fake items to the Russians.

“Trip to China” refers to Imperial Panda, a Chinese restaurant in the food court. “Tread lightly” refers to a shoe store called Kaufman Shoes. “Blue and yellow meet in the west” is the most challenging puzzle piece yet. The huge clock on the wall has a blue hour hand and a yellow minutes hand, so Robin assumes this part of the code refers to 9:45.

That night, they stalk the loading dock outside. Sure enough, deliveries for Imperial Panda and Kaufman Shoes are made at 9:45, but they’re for the Russians.

Sticking your secret Russian base under a hugely popular mall might seem like a ridiculous idea, but maybe that makes it the perfect cover?

Stranger Things Season 3 is now available to stream on Netflix.

More like this
Culture
Sep. 27, 2022
8 thrilling sci-fi movies and shows new on HBO Max and Netflix in October 2022
By Robin Bea
Entertainment
Sep. 21, 2022
You need to watch DC’s most underrated movie of all time on Netflix ASAP
By Eric Francisco
Entertainment
Oct. 3, 2022
House of the Dragon Episode 7 ending explained
By Jake Kleinman
Related Tags
Share: