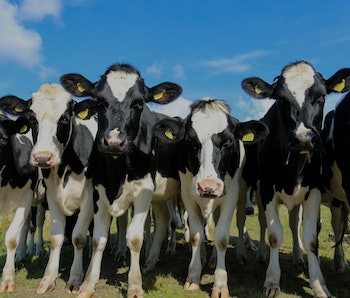 The beef industry has a lot to answer for when it comes to its impacts on the climate crisis. The cows themselves, however, can’t help but contribute their own stream of methane into the atmosphere each time they let a burp fly. Fortunately, scientists have found a way to make cow burps more tolerable for the climate, as they write Wednesday in Science Advances.

Each time a cow burps, it releases a small amount of methane. The natural gas is manufactured by a process called enteric fermentation, which occurs as the microbes in one of the cow’s multi-chambered stomachs (called a rumen) break down carbohydrates from grass, releasing methane as a byproduct. Those gasses are then belched out by the cow (burps tend to have more methane than farts, says NASA).

Cow burps are far from the biggest challenge facing the world when it comes to climate. But they’re not to be neglected either. Methane only made up 10 percent of US greenhouse gas emissions in 2017, while carbon dioxide (CO2) made up 82 percent. But the thing about methane is that it’s particularly efficient at trapping radiation in the atmosphere. Over 100 years, one pound of methane has 25 times greater impact on climate than a pound of CO2 does.

In the new paper R. John Wallace, Ph.D., a professor at the University of Aberdeen, proposes that the methane-releasing microbes in in cow stomachs are, to some extent, determined by the cows’ genes, and so they can be manipulated to perhaps produce less methane.

That heritable pattern hints at new ways that we might think about controlling methane emissions from enteric fermentation, including a “microbiome-led breeding/genetic program,” Wallace and his team write.

Wallace and his team identified common microbial suspects in the microbiomes of 1,106 dairy cows from England, Italy, Sweden, and Finland. About 50 percent of the cows shared 39 microbial species in common in their microbiomes. Those species appeared to be heritable, suggesting that they are passed on from one generation to the next unless humans intervene.

Analyzing the cow microbiomes using two machine learning algorithms, the team found “core heritable bacteria” called Succinovibrionaceae that may be of particular interest regarding methane control. In an earlier study conducted on beef cattle in 2015, Wallace also found that Succinovibrionaceae seems to play a role in how much methane a cow produces.

The 2015 paper concluded that a higher abundance of Succinovibrionaceae (alongside other changes in the microbiome) was linked to lower methane production. In the new paper, Succinovibrionaceae is called a “a key determinant in between animal differences in methane emissions.”

As far as the proposed “microbiome-led breeding/genetic program” goes, focusing on how to control production of Succinovibrionaceae in the cow microbiome may be a good way to start, the methane-producing microbes must be tackled at their source.

There are other ways to tackle methane-producing bacteria at their source. Feeding cows a a mix of seaweeds, as opposed to carbohydrate feed, was shown to reduce their methane emissions in cattle by 20 percent in 2016. Some estimates even place reductions as high as 80 percent. Seaweed, for its part, does pose some problems — particularly that methane-producing microbes may adapt to the new food source, not to mention the fact that some cows seem not to enjoy seaweed very much.

Still, cows can’t take all the blame for methane emissions. Human activities remain a far bigger driver of the potent gas, with between 50 and 65 percent of global methane emissions coming from humans.

So while fixing cow burps may need to take a backseat to transitioning away from meat entirely or actively removing methane from the atmosphere, there’s something to be said for making cows more sustainable. As the world scrambles to limit warming to 1.5 degrees by 2020, every methane-laced burp counts.

A 1000-cow study across four European countries was undertaken to understand to what extent ruminant microbiomes can be controlled by the host animal and to identify characteristics of the host rumen microbiome axis that determine productivity and methane emissions. A core rumen microbiome, phylogenetically linked and with a preserved hierarchical structure, was identified. A 39-member subset of the core formed hubs in co-occurrence networks linking microbiome structure to host genetics and phenotype (methane emissions, rumen and blood metabolites, and milk production efficiency). These phenotypes can be predicted from the core microbiome using machine learning algorithms. The heritable core microbes, therefore, present primary targets for rumen manipulation toward sustainable and environmentally friendly agriculture.