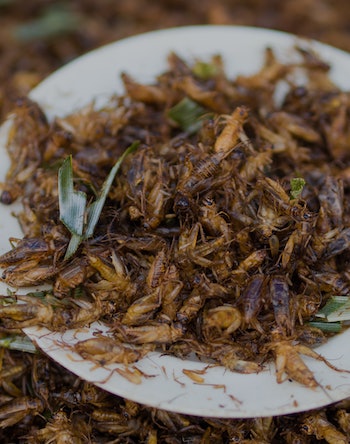 Climate change is real, and we’re all going to have to change the way we eat. That’s because the average North American diet is inefficient and energy intensive. A big part of the problem is our global addiction to meat — an astonishing 30 percent of the world’s ice-free land is used to grow the crops we feed to the animals we eat.

As environmental impacts worsen, we’ll have to turn to alternatives for our diet. Tastes will change as people choose to eat more eco-friendly products, and policies will support the production of foods with lower energy costs. Here are some ideas for how we will feed ourselves in a carbon-sensitive future.

“People are not open to eating bugs straight up — I know this from experience,” says Johanna Kelly, a New York-based filmmaker whose film about consuming insects, The Gateway Bug, premieres next month. She’s not so squeamish. “The yuck factor is kind of ridiculous,” Kelly says, especially when the really yucky thing is how animals are treated in industrial food systems and the cost of that on the environment.

She thinks a great bug-eating revolution is upon us, especially as an additive into processed foods, giving them a boost of protein, fiber, and nutrients while lowering their footprint. Bugs could also change how we feed farm animals and fish, reducing the energy inputs needed to make the food we crave. “I don’t think we’re going to change western diets anytime soon, but we can change how that diet is created,” says Kelly.

In two years working on the film, she’s seen bug eating go from a point where it was dismissed as nonsense to a national trend — some Whole Foods stores have an entire section devoted to bug products, high-end restaurants around the world are adding bugs to the menu, and important Silicon Valley types are investing millions in bug-eating startups. “When you start seeing people throwing money at things, it’s probably going to blow up,” she says.

The simplest solution to America’s high-carbon diet problem isn’t some fancy new innovation. Instead, alternative protein seekers need to only look to how developing countries get theirs. That’s true for bugs, which are consumed in many parts of the world, but it’s especially true for beans. “The common bean is the most important food legume in the world for direct human consumption,” says Jim Burridge, a PhD candidate at Pennsylvania State University who researches drought-resistant beans.

His research group is working on developing and disseminating new varieties of beans in Africa and Latin America that will be better equipped to deal with expected climatic conditions of the future. Some of those varieties are crosses between the common bean, which includes many the edible bean types we normally eat, and the tepary bean, which tend to be smaller and are naturally heat-tolerant and drought-resistant.

While Burridge is mainly looking for agricultural solutions to the problems of climate change in poorer countries, Americans could learn a thing or two from their example. “I could see beans becoming more important, but it’s really up to how policy and culture adapt to changing realities as we move forward.”

A great deal of effort is currently going into the genetic engineering of existing crops so that they produce higher yields and are less vulnerable to the stresses of climate change. The United States has already approved a strain of drought-resistant corn called DoughtGard, owned by Monsanto, to mixed results.

While genetically modified crops are generally as safe and nutritious as their unaltered cousins, critics contend that these efforts merely double down on a flawed industrial agricultural system that degrades soils, requires huge inputs of chemical fertilizers, and is dictated by big business interests.

There will be winners and losers in our climate change-affected future. As ecosystems are disrupted, new organisms will come to dawn, and some of them will be too successful, crowding out the existing diversity of plant and animal life. These invasive species will be prime candidates for the sustainable diets of the future.

Some seafood restaurants and advocacy groups are ahead of this trend, pushing for the consumption of Florida’s lionfish, Connecticut’s Asian shore crab, Asian carp from the Great Lakes, and more. Eating invasive species doesn’t make the problem go away, but it can be a delicious way to feel good about eating tasty seafood.

A trendy tech startup called Impossible Foods has developed the Impossible Burger — a plant-based patty that actually bleeds. The secret is heme, which is the substance that gives meat its red color and iron-ish flavor.

So far it’s only available at a handful of cool restaurants in San Francisco, Los Angeles, and New York, but it’s definitely a hit. The restaurants have had to make special policies to control the limited supply of the burgers in the face of demand. People are obviously excited to try it; but will they be lining up for more, especially as climate change becomes more real?