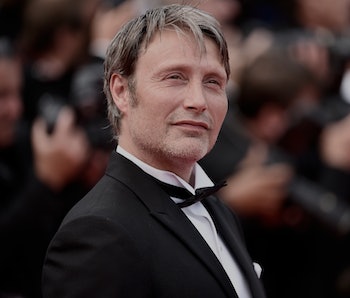 Hannibal comes to an end this week. It’s a sad state of affairs to witness such a pioneering work, brimming with visual ambition and stylized storytelling, cut down mid-stride. In years to come we’ll reminisce fondly on the show’s trailblazing — instead of shaking our Fannibal fists at the gods and crying out for an explanation - and in particular, on the isolated cool of its leading man Mads Mikkelsen. Slipping into the exquisite footwear previously donned by Anthony Hopkins and Brian Cox, the refined Dr. Lecter Mikkelsen quite simply made the role his own.

That haunting stare, those ruby red lips always on the cusp of revealing his secret, the impeccable sweep of hair across his brow… the Dane brought a quiet, unassuming confidence to the character. He made watching Lecter’s strategic plan unfold a compulsive act. Something he’s had years to hone, because, he’s rarely played anything other than bad guys.

Outside of Hannibal he rose to worldwide prominence when Quantum of Solace pounced on his exotic looks and unusual cadence as the sinister antagonist to James Bond, Le Chiffre. He returned to his homeland for 2012’s The Hunt, where he played a kindergarten worker in a small Danish town, accused of sexually abusing the children in his care.

Mikkelsen’s synonymity with villainous roles has undoubtedly typecast him. In a recent interview a specific question addressed this with regards to his role in the Star Wars spinoff Rogue One. Would he be playing the baddie? No, was his response, he would in fact be one of the good guys. The fact that this was singled out as a query relevant to Mikkelsen’s track record is telling. Alright, so he’s not embracing his inner devil, yet the reporter made a beeline for a confirmation. Because he makes for such a captivating rogue.

Which makes what occurred 24 hours later all the more prophetic. Another industry trade reported that he’d entered “early talks” to join Marvel’s Doctor Strange as one of its two villains. While it’s nothing more than a coincidence, it’s also very peculiar that this specific casting announcement surfaced a day later. It seems reactionary. As though the powers that be heard Hannibal was going soft and just couldn’t bear it.