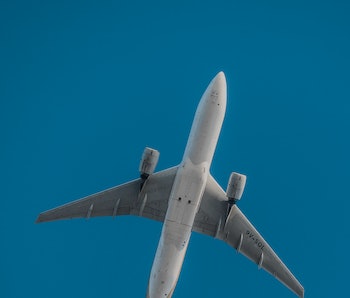 Tesla may have its sights set on an electric plane. The idea has been floated by CEO Elon Musk a few times over the past decade, but it was only recently that battery technology has advanced enough so that the electric car firm could feasibly take to the skies.

An electric plane could bring renewable energy to the industry that remains one of the world’s largest polluters. The aviation industry produces around two percent of global carbon emissions. Plant-based biofuels could reduce emissions for long-haul flights, but it’s a far cry from a fully clean energy-powered commercial jet.

Musk has mentioned the idea as far back as 2008, explaining how “an electric plane gets more feasible as battery energy improves.” In 2012, he said that he’d had a design in his head for the past four years.

These references continued. In 2014, Musk told an MIT symposium that he was “toying” with the idea. In 2015, he again said he had a “design in mind.”

By 2016, he was describing his electric plane as a “vertical takeoff and landing” design, which would negate the need for a landing strip. In 2017, he said that it was “not inconceivable I would do an electric plane,” but that “we are not quite there in terms of the energy density of batteries for an electric plane.”

Musk has mentioned the battery density issue a few times before. The problem is making a craft light enough to fly, but powerful enough to carry passengers. In September 2018, where he discussed his idea for a supersonic jet, he claimed that current electric car batteries are around 250 watt-hours per kilogram. A plane could fly with 400 watt-hours, but an ideal weight would be 500 watt-hours.

This conundrum of how to get an electric plane to fly could soon be resolved, thanks to some interesting shifts in the market.

Tesla Electric Plane: When Will It Be Revealed?

In July 2019, Musk declared that an electric plane is feasible, but it requires a change in battery density. This shift, he declared, would probably take around five years.

It’s not an unreasonable target. Tesla bought Maxwell Technologies in a $218 million deal back in February 2019, a battery technology company working with a variety of exotic materials. The firm was working with dry electrodes, which could drop cobalt from the equation, increase production 16-fold, and bring down costs by 20 percent.

Perhaps the most interesting part of the Maxwell acquisition was the firm’s claim that these dry electrodes could support denser batteries. While 300 watt-hours seemed a reasonable claim, the firm also said it had a “path” to 500 watt-hours. Following the acquisition, Musk suggested in the 2019 annual shareholder’s meeting that Tesla was looking at bringing its mining and other operations in-house, phasing out supplier Panasonic.

Reaching feasibility within five years could mean that Tesla could make some sort of public move in the mid-to-late 2020s. The company’s Master Plan Part Deux from 2016 is nearing its end: the Model 3 is out; and the Pickup Truck, second-generation Roadster, Model Y, and Semi truck are also about to hit the road. Autopilot is expected to become a full-blown autonomous driving suite as early as next year, at which point it will begin powering a fleet of robo-taxis.

An electric plane could perhaps form one of the ideas in a future “Master Plan Part Trois,” one where electric cars are more mainstream and sister firm SpaceX has already sped up inter-Earth travel with the new Starship system. While the Starship will whisk people across Earth in half an hour under intense conditions, it’s still burning liquid oxygen and methane to complete the trip.

It will likely take a little longer. Analyst Roland Berger claimed in May that an electric jet that could compete with current designs may not land until 2030 at the earliest.

Tesla Electric Plane: What is the Battery Range?

It may be too early to assume the plane could complete the same trips as a regular jet, at least at launch. The world’s longest flight, from Singapore to New York, covers over 9,300 miles in 17 hours, a feat that could prove a bit much for the electric jet at first.

Musk explained at the 2014 MIT event that the percentage of cells on an aircraft would need to be about 70 percent. When that percentage reaches the mid to high 70s, “you can go transcontinental…west coast to east coast.” Musk ruled out, however, an inter-continental journey.

During his September 2018 Joe Rogan Experience appearance, Musk explained that the battery would only need to overcome gravitational potential energy:

The energy you use in cruise is very low, and then you can recapture a large amount of your gravitational potential energy on the way down. So you really don’t need any kind of reserve fuel if you will, because you have … the energy of height.

Musk later explained that the plane works as a “force balance”:

So a plane that is not accelerating is a neutral force balance. The force of gravity, lift force of wings, then you’ve got the force of one of the thrusting device, propellor turbine or whatever it is, and the resistance of the air. The higher you go the lower the air resistance. Air density drops exponentially, but drag increases with the square, and exponential beats the square. The higher you go, the faster you’ll go with the same amount of energy. At a certain altitude, you can go supersonic with quite a lot less energy per mile than an aircraft at 35,000 feet.

If Tesla can solve the energy issue, it could travel further than expected.

Tesla Electric Plane: How Many People Will Fit In It?

An even bigger unknown is seating capacity. An Airbus A380 can hold anywhere between 407 to 615 seats, and if Tesla is aiming to beat the existing designs, it will probably have to offer similar capacity.

The space is heating up, with analyst Ronald Berger claiming that around 100 electric plane projects are in the works, most with the goal of producing small air taxis.

Tesla Electric Plane: What Has Elon Musk Said About It?

Musk has not always sounded so positive about flying machines. In February 2018, he dismissed Uber’s flying car idea:

If you love drones above your house, you’ll really love vast numbers of ‘cars’ flying over your head that are 1000 times bigger and noisier and blow away anything that isn’t nailed down when they land.

Musk has cited this as part of his idea behind The Boring Company, a tunnel-digging venture that creates more city capacity by going underground instead of taking to the air.

With the large number of planes in the sky every day, and the high demand to travel distances spanning thousands of kilometers, it’s perhaps not surprising that Musk is also aware that going underground will not be for everyone.

More like this
Innovation
8.8.2022 10:00 AM
A wild new plane-train hybrid could whoosh you to your destination — if it can get off the ground
By Molly Glick
Entertainment
8.5.2022 12:30 PM
For All Mankind Season 3’s space mogul is better than Elon Musk — here's why
By Ryan Britt
Innovation
8.9.2022 11:00 AM
This self-healing material could fix your dinged-up car in 30 minutes
By Molly Glick
Related Tags
Share: