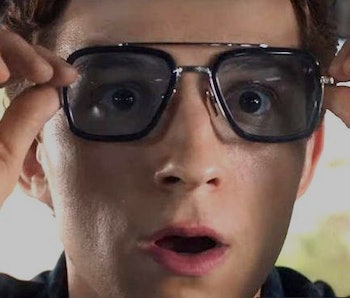 Avengers: Endgame may have unknowingly unlocked the multiverse. In Spider-Man: Far From Home, Mysterio is the first character in the Marvel Cinematic Universe to bring up the concept of multiple parallels universes, which basically means other Earths (or dimensions) can co-exist and even interact. While that revelation sets up a multitude of possibilities, it’s actually the surprise appearance of a very familiar Spider-Man character that may prove there’s really a multiverse the MCU.

The multiverse isn’t a new idea for comic books fans, but the MCU has yet to fully embrace it. Mysterio changed that. During his introduction in the Spider-Man: Far From Home trailers, Mysterio says he’s actually from a parallel universe, Earth-616 to be exact. His planet was supposedly an exact replica of Peter Parker’s, but with certain differences such as the Elementals.

However, if you’ve seen Spider-Man: Far From Home you know that everything Mysterio said was a big fat lie. He didn’t come from another dimension. He was just a disgruntled Stark employee with some impressive tech.

So does that mean the whole “multiverse” thing was just a big fakeout? Not so fast. A closer analysis of the Far From Home the post-credits scene, which re-introduces J.K. Simmons as J. Jonah Jameson just like in the Toby Maguire movies, might just prove the multiverse is still in play.

Sure, it sounds like wishful thinking, but there’s enough evidence to back up this galaxy-brained theory. So put on your tinfoil hats and let’s dive right back into Marvel’s multiverse.

Simmons originally played The Daily Bugle’s editor-in-chief in Sam Raimi’s Spider-Man trilogy and his character is best known for despising the web-slinging hero and having a short temper. Reprising his role not only makes Simmons’ version of Jameson an official part of the MCU, but also hints at the connection between Raimi’s Spider-Man and MCU Spider-Man. Is Tom Holland just a younger version of Tobey Maguire’s Peter Parker? Do they exist in the same multiverse?

With Jameson as the link, it’s not too far fetched to believe the multiverse theory is starting to take shape. After all, the Marvel team has become well-known for using post-credits scenes as a way to set up the next film in the MCU. Since Far From Home essentially functions as a palate cleanser between Endgame and Phase 4, Jameson’s appearance could be a small part of a much larger and overarching storyline that stretches beyond Spider-Man 3.

While not officially a part of the MCU, Spider-Man: Into the Spider-Verse already details multiverse’s existence and even references Maguire’s Spidey (the scene of emo-Peter walking down the street like he does in the infamous scene from Spider-Man 3 couldn’t have been anyone else). Holland even revealed that he was supposed to have a cameo in Spider-Verse as well, cinching the idea of the multiverse that includes the MCU.

Additionally, Mysterio’s mention of Earth-616 can’t be a coincidence. In the comics, Jameson hails from Earth-616, which is essentially the main universe that all other Earths mirror and stands at the core of Marvel’s multiverse continuity. Why mention that specific number in Far From Home if it wasn’t meant to tease the multiverse? The Easter Egg and the cameo might also hint at the potential expansion of the MCU in Phase 4. With a multiverse in place, the possibilities are endless and the studio could draw from various comic book storylines that aren’t limited to the primary earth.

Now that the world is recovering from the “Blip,” which is what the aftermath of Thanos’ Snap is being called, there’s no telling what the MCU has in store for their future films. Simmons’ surprise cameo may have just been a fun nod to Raimi’s films and a nice way to bring back the actor as an antagonist for Spider-Man 3, but the multiverse connection is too strong to be a throwaway joke. Whether or not anything comes of it, Far From Home definitely sets up a lot of exciting possibilities for the MCU’s future.