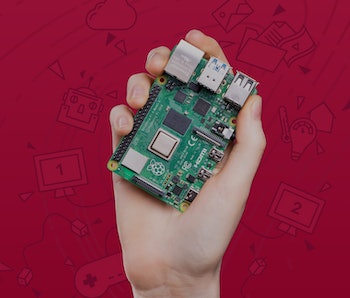 The Raspberry Pi 4 is here, and in short order, the internet’s most tech-savvy hobbyists immediately got to work.

Ever since the original credit card-sized computer launched in 2012, it inspired a range of DIY designs, ranging from the mundane to the downright bizarre. The $35 piece of kit can be used to power all manner of setups, acting as a home media server or a smart home automator. Its tiny size is perfect for customization, making it possible to put in a tiny computer in a wide array of devices.

The latest Pi 4, launched on Monday, has the following specs:

With the launch of the new model, here’s some of the most unique projects that have emerged over the years:

Taking Care of a Plant

The Raspberry Pi can help you crowdsource your chores!

Tyler Jaywood is the creator of TakeCareOfMyPlant, a project that combines a Raspberry Pi with a Homasy submersible water pump. The computer is then hooked up to a subreddit, where users vote on whether to give Freyja the zebra plant some water.

Every morning, at midnight Mountain time, a Reddit bot posts a new thread for the day. Users comment “yes” or “no” to vote whether to add water that day. The votes are counted at 8 p.m. Pacific time and the water is administered depending on the results.

A Nest webcam provides a real-time view of the action, so users can watch the watering take place once voting is completed. The system also indicates moisture, temperature, humidity and sunlight levels to help users make a more informed decision about the zebra plant’s watering needs.

The subreddit has over 10,000 users at the time of writing. Why do household chores when you can delegate to the internet?

No bus timetable? No problem!

This was thanks to a Montreal-based Good Samaritan named Greg Sadetsky, who noticed that people across the street from his co-working space struggling to work out when the next bus would arrive. To solve the problem, he took a 28-inch monitor, linked his Raspberry Pi to the bus company’s website, and used the data to display a giant readout of when the next bus would arrive:

Ready to slim down your laptop even further? Mario Lang created a whole machine using a braille display and a Raspberry Pi.

Braille displays, historically, are pretty huge. A 40-cell display used to take up the entire underside of a 13-inch laptop. Newer form factors can fit in front of the laptop, but that involves juggling two devices on your lap. To make working on a computer more comfortable for the visually impaired, Lang bought the Handy Tech Active Star 40, which maintains the old form factor but has updated internals.

The newer device had some empty space, not quite large enough for a smartphone, but still with a micro-USB cable to power something. He then used the Raspberry Pi Zero to create an ultra-low-power, super-slim braille laptop. It has Bluetooth connectivity and a 64GB SDHC card. Lang is now considering a kit to help other blind users try it for themselves.

“RetroPie” uses a variety of open source projects to provide an easy-to-install emulator for a number of classic systems. It uses RetroArch to power the games and an emulation system that supports a variety of old consoles from the Amiga right up to the Nintendo Wii.

The project used a Pi 3B+, a Dell P190ST monitor from Goodwill, HAPP buttons and Zippyy flight sticks. They are paired with EasyGet Zero Delays encoders to make the project run. The whole thing is encased with half a sheet of three-quarter inch MDF. The whole project cost just over $130 to make, not counting the joysticks and buttons.

Magic Mirror is an open source smart mirror platform that can make you feel like you’re living in the sci-fi future. It can display the weather, date, time and more information as you’re getting ready.

Imgur user “TheREDNAVE” used the project to build his own creation:

The mirror above uses a Raspberry Pi 3, a 40-inch TCL TV and a one-way mirror. The whole thing cost $750 to build, including $280 in labor costs for a carpenter.

Why not get your Raspberry Pi to fix you a drink? Reddit user “bigdogyost” used it to power a robotic bartender, using a Java app that controls eight solenoid valves. The valves dispense drinks depending on the recipe. Its prototype isn’t the prettiest, but it works. The project is open sourced at GitHub.

A Black Box for the Car

RoadApplePi can hook into a car’s OBD2 diagnostic port, giving a real-time readout of the current state of the vehicle. It also uses hardware-accelerated video encoding to provide smoother dashcam footage.

HackerNews user “jonaswi” used their device to open the door when the cat is nearby. As they live in an apartment with strict fire safety regulations, a conventional cat flap was out of the question.

I installed a fire-protecion-approved door drive that is hooked to a raspberry pi. Another raspberry pi then analyzes a video stream and detects my cat. If my cat is in the frame for n amount of time, a message is sent to the pi conntected to the door drive and the door opens up slightly for him to get in.

If you can’t stand internet ads, the Raspberry Pi could help. Pi-hole is an open source ad blocker that runs on the tiny computer, routing all ad-serving domains to a dead end before they can reach the device. It’s rather more involved than a software-based ad blocker, but it’s perhaps the last such blocker you may ever need.

Reddit user “torchic_for_dinner” used the tiny computer to produce a table of the future:

The end result uses 50 RGB LEDs, a Raspberry Pi, and some wiring to create stunning visual effects. Users can even flick through the light settings, or choosing a new color from their smartphone or tablet. The whole construction cost $550, $180 of which was the two-way mirror.

While the Raspberry Pi may not be most powerful computer around, its size and customizability have unleashed incredible creativity. And its proponents are just getting started.