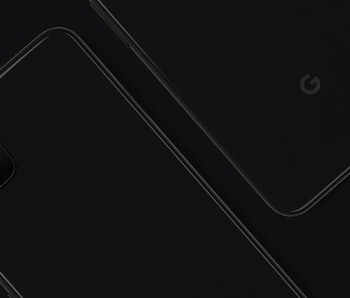 Google appears to once again be making strategic leaks a key part of its marketing strategy. Not only have key design elements been confirmed by the company after leakers posted them online, but on Friday reports emerged that the first Pixel 4 had been spotted in the wild.

The latest shots of the Pixel 4 were reported by 9to5Google, and don’t reveal too much. The shot was taken from some distance, and depicted the Pixel 4 from a vantage point that we’d already seen before. Still, it has the same canvas-feeling protective case the Pixel had last year, and had the same large, square camera bump on the on the rear as a marketing shot the company posted on Wednesday.

According to 9to5Google’s report, the Pixel was spotted in London, which matches last year’s pattern that saw a steady dripping of leaks from Europe.

Pixel 4 Design: What We Know So Far

The pace of Pixel leaks is picking up. Most notably, the company itself shared some promotional images of the Pixel that center on the smartphone’s backwards facing camera array. Google’s image was shared a few hours after some Pixel 4 concept art was shared by the leaker Ben Geskin.

Google’s images are pretty dark, but they center what could be one of the Pixel’s key selling points, a square camera array that appears to house a lot of tech, not just camera lenses. Some of the possibilities include an extra microphone or depth sensor that can be used to activate gesture controls, a new smartphone feature that was a mainstay of this year’s Mobile World Congress.

The company hasn’t yet shared an image of the front of the Pixel 4, but Geskin’s concept art indicates that it will be nearly notchless, with an incredibly narrow bezel instead that might be enough space to hold the Pixel’s front-facing camera array.

Pixel 4 Features, Release Date: Everything We Know So Far

The Pixel may be the leakiest franchise in the smartphone industry. Though the Pixel 3 wasn’t released until October, 2018, two Russian blogs got their hands on what looked like a review or even a consumer-facing unit as early as August, and they were able to reveal most everything about the device, including giving a sneak peak of some of its image editing and scheduling features. As the Verge notes, it also appears that this will be the first Pixel model without a fingerprint scanner on the back, typically housed in the Google logo. That suggests there’ll be facial recognition or possibly an in-screen fingerprint scanner.

As for the release date, Google has a similar plan for rolling out the Pixel 4 as the Pixel 3, according to a leaked marketing timetable from Verizon. The timeline, published in the protected Twitter account of the prolific leaker Evan Blass, has the Pixel 4 dropping in October yet again, though it looks like it will be a little later in the month.

As for features, we can expect the Pixel 3 to continue emphasizing its signature camera, which leverages Google’s A.I. to do way more with less in terms of hardware. With Apple expected to make camera improvements a central part of the strategy for the iPhone 11, the Pixel 4 will have to answer in some way. Apple is notably rumored to be introducing a very similar square bump to house its camera tech, but the two will probably wind up with slightly different arrays.

Another rumor, this one from 9to5Google as well, holds that the Pixel 4 will be the first Pixel smartphone to use some of the chips developed for Project Soli, a Google initiative to make hardware that can recognize fine hand gestures to let you operate hardware with finger snaps, say, or a flick of the risk. In January, the FCC approved a petition from Google to operate Soli sensors at a longer range.

Gesture controls have only recently started rolling out as a point of differentiation in the increasingly crowded smartphone market. The best example is probably the LG G8 ThinQ, which uses a small gesture sensor to let you handlessly swipe left or right, take screenshots, and execute other basic functions.

Is this how the new Pixel 4s will break new ground, now that Apple appears hellbent on closing the gap between the Pixel and the iPhone’s camera set-ups? Fortunately, if history is any indication, we won’t have to wait all the way until October to find out.