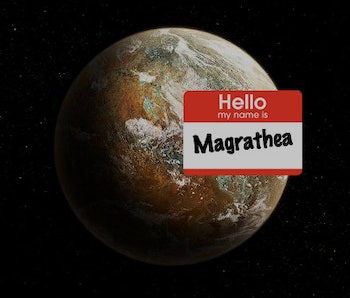 As part of its 100th anniversary commemorations, the Paris-based International Astronomical Union is organizing the IAU100 NameExoWorlds, a global competition that allows any country in the world to name to a selected exoplanet and its host star.

More than 70 countries have already signed up to organize national campaigns that will provide the public with an opportunity to vote on a name for an exoplanet — defined as any planet outside our own solar system. The aim of this initiative is to create awareness of our place in the universe, and to reflect on how the Earth would potentially be perceived by a civilization on another planet.

This is only the second time in history that a contest will result to the naming of stars and exoplanets. Following the first NameExoWorlds campaign – which named 31 exoplanets in 19 planetary systems in 2015 – the IAU will now offer every country in the world the chance to name one planetary system, comprising a planet and its host star. The IAU is the authority responsible for assigning official designations and names to celestial bodies.

Prior to this, you had to actually discover a new planet to be able to name it. Those days officially over.

Each nation’s designated star is visible from that country and bright enough to be observed through small telescopes.

The number of exoplanets being discovered has risen significantly – and will continue to do so – as the technology needed to detect them improves. Both the TRAPPIST (Transiting Planets and PlanetesImals Small Telescope) based in Chile and NASA’s Spitzer Space Telescope, which is in orbit, were used to confirm the detection of seven Earth-sized planets orbiting a star 40 light-years away in February, 2017.

“This exciting event invites everyone worldwide to think about their collective place in the Universe, while stimulating creativity and global citizenship,” declared Debra Elmegreen, IAU President-Elect, in a statement. “The NameExoworlds initiative reminds us that we are all together under one sky.”

In each participating country, a national committee has been specially created by the National Outreach Coordinators (IAU NOCs) to carry out the competition at the national level. The national committee, following the methodology and guidelines set up by the IAU100 Name ExoWorlds Steering Committee, is the body responsible for providing the conditions for public participation, disseminating the project in the country and establishing a voting system.

The contest will run from June to November of this year and, after final validation by the IAU100 Committee, the results will be announced in December. The winning names will then be used freely within the scientific community, with due credit to the people who proposed them.

If your country is not yet organizing a competition – and you are part of a science or non-governmental organization interested in carrying out a nation-wide contest — there is still time to organize one. To do so, send the IAU a brief proposal through this form before July 30, 2019, and the NameExoWorlds Steering Committee will review your proposal and respond with a decision.

The IAU was founded in 1919, and consists of over 12,000 astronomers from 97 different countries; its authority is no joke — for example, all the debating once held about the planetary status of Pluto was ended once the IAU officially downgraded Pluto to a dwarf planet in 2006. In other words, the planet name game is ruled by the IAU, case closed.

Knowing this, what name would you put forward? What name do you think the USA would choose? Chad? Planety McPlanetface? Let’s hope not. What about a name of a fictional planet from a sci-fi series…thus creating a self-fulfilling prophecy of sorts? Here’s a few examples…

Helpful hints from the IAU include not using “names of pet animals,” “names of individuals, places or events principally known for political, military or religious activities” or “names of a purely or principally commercial nature”—and try to keep your appellations “pronounceable (in some language)” and “non-offensive.”

The US Competition to Name an Exoplanet

The US competition will open soon. The planetary system that the USA has been assigned is HD 17156 b, a gas giant exoplanet that orbits a F-type star. Its mass is 3½ times that of Jupiter, it takes 21.2 days to complete one orbit of its star and was discovered in 2007. HD 17156 b is 255 light-years from Earth and lies within the constellation of Cassiopeia.

Other Countries Taking Part in Naming an Exoplanet