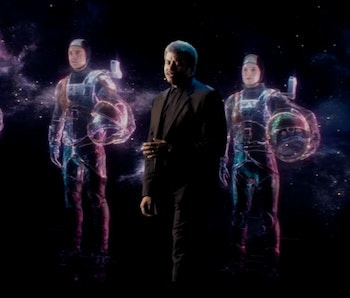 The teaser and official trailers for Ridley Scott’s The Martian work like regular trailers: They set up the conflict and suggest that, if you buy tickets, you will get some resolution (though it’s not exactly like the plot here is a mystery). The third trailer, though, is all about world-building — err, Mars-building. And who better to Mars-build than Neil deGrasse Tyson? Tyson explains the wonders of the Ares Mars mission on a fictionalized version of his show called StarTalk of the Future.

Future Tyson builds anticipation for The Martian’s entire universe, not just the plot. In this world, humanity reached Mars “back in 2029.” So, good for us. And we presumably cracked some medical riddles because Tyson doesn’t look like he’s aged a day.

The only problem with this attempt at virality — or attempt at leveraging @NeilTyson’s Twitter following — is that people could end up more interested in Tyson’s future than in getting Matt Damon off the Red Planet. The biggest surprise is that there are tv shows in the future. We demand VR space documentary talk shows!