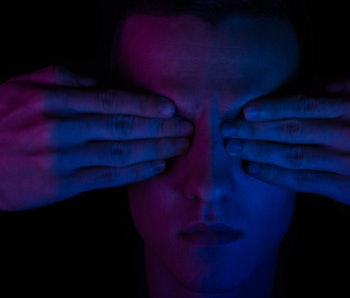 The philosopher John Locke, who believed that true knowledge of the world could only stem from sensory experiences, thought that blind individuals could never understand the concepts of light and color. Locke, it turns out, was wrong. In a recent PNAS study, blind people demonstrate that they do understand what sighted people process through vision, proving that “visual” ideas don’t actually require sight.

In the study published Tuesday, scientists demonstrated how blind people make visual sense of what they cannot see. While previous studies suggested that the most efficient way for a blind person to know that, say, a flamingo is pink, is to memorize that fact, this study demonstrates that blind people instead look at the world like scientists and make sense of the visual world through a catalogue of clues.

“First-person experience isn’t the only way to develop a rich understanding of the world around us,” co-author and Johns Hopkins doctoral candidate Judy Kim explains. “People often have the intuition that we can’t know what we can’t see.”

This intuition is wrong, as Kim and her colleagues showed by testing 20 blind and 20 sighted adults, all around 30 years old, about their knowledge of animal appearances. The participants were asked to order a variety of animals by size and height and to sort the animals into groups based on shape, skin texture, and color. They were also presented with a group of animals and asked which one was not like the others.

In most cases, the sighted and blind people performed equally well on the test. They sorted the animals in predominantly the same way, and both agreed on which physical features comprised the predominant description of each group of animals. For example, both blind and sighted people described dolphins and sharks to be of similar shape.

What the two groups disagreed about the most was, strangely, the factor that the researchers hypothesized would be the most agreed upon: Color. Sighted participants sometimes had trouble describing the shape of an animal, but they always readily provided its color. Blind people did not. This outcome refuted the “learn-by-description” hypothesis, which posits that blind people learn about objects by hearing the way other people describe them. If this were the case, then the blind participants should have been able to identify color easily, since sighted people seem to always include color in their descriptions.

But color is what blind individuals were least able to identify. And so, the researchers argue that the “learn-by-description” hypothesis must be incorrect and that blind people must gather visual information in a different way: By deducing it from existing knowledge about an object and details related to it.

“In the absence of direct sensory access, knowledge of appearance is acquired primarily through interface, rather than through memorization of verbally stipulated facts,” the scientists write.

In other words, blind people take the scientific approach and infer appearances through other properties like taxonomy and habitat. This strategy works well for features like shape and textures; for example, birds have feathers and wings, so it’s implied that this holds true across bird species. Color is less easy to infer. Since there are a lot of animals that are the same color, it’s hard to deduce that, say, bears and ravens are black, based on the other things you know about animals.

But color inaccuracies aside, the research proves what blind people already know: You can have a rich and accurate sense of the world without actually seeing it.

How does first-person sensory experience contribute to knowledge? Contrary to the suppositions of early empiricist philosophers, people who are born blind know about phenomena that cannot be perceived directly, such as color and light. Exactly what is learned and how remains an open question. We compared knowledge of animal appearance across congenitally blind (n = 20) and sighted individuals (two groups, n = 20 and n = 35) using a battery of tasks, including ordering (size and height), sorting (shape, skin texture, and color), odd-one-out (shape), and feature choice (texture). On all tested dimensions apart from color, sighted and blind individuals showed substantial albeit imperfect agreement, suggesting that linguistic communication and visual perception convey partially redundant appearance information. To test the hypothesis that blind individuals learn about appearance primarily by remembering sighted people’s descriptions of what they see (e.g., “elephants are gray”), we measured verbalizability of animal shape, texture, and color in the sighted. Contrary to the learn-from-description hypothesis, blind and sighted groups disagreed most about the appearance dimension that was easiest for sighted people to verbalize: color. Analysis of disagreement patterns across all tasks suggest that blind individuals infer physical features from non-appearance properties of animals such as folk taxonomy and habitat (e.g., bats are textured like mammals but shaped like birds). These findings suggest that in the absence of sensory access, structured appearance knowledge is acquired through inference from ontological kind.

More like this
Science
Jan. 21, 2023
Plague study complicates a commonly held belief about the Black Death
By Samuel Cohn, Philip Slavin and The Conversation
Science
Jan. 29, 2023
Are coyotes dangerous to dogs and cats? Here’s how to keep your pets safe
By Tara Yarlagadda
Science
Jan. 22, 2023
Infection expert answers 7 top questions about Covid-19’s “Kraken” subvariant
By The Conversation and Sameer Elsayed
LEARN SOMETHING NEW EVERY DAY.
Related Tags
Share: