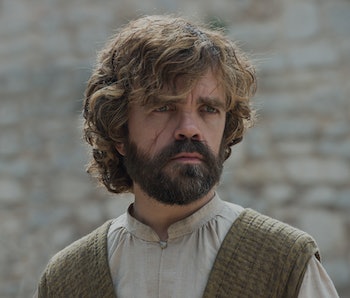 The Game of Thrones series finale left a lot of loose threads still hanging, but there’s one big question we can answer pretty easily. Did Tyrion Lannister finally get his birthright, Casterly Rock? The answer seems to be a pretty obvious yes, even if it’s never said outright in the Game of Thrones finale.

Instead, in one of the show’s final scenes, Tyrion, once again the King’s Hand to “Bran the Broken” makes a subtle nod to his obsession with Casterly Rock, mentioning his time spent improving the sewer systems of his family castle and suggesting they do the same at King’s Landing. It’s easy to miss, but that one moment serves as a nice callback, and a reminder that when he retires from his current job, Tyrion will have a castle to call home.

As you may remember, Tyrion’s wanted Casterly Rock for years, and after successfully defending King’s Landing during the Battle of the Blackwater, he demanded as much from his father, Tywin, saying it was “mine by right. I am your son and lawful heir.” Unsurprisingly, it didn’t go well.

“You are an ill-made, spiteful little creature full of envy, lust, and low cunning. Men’s laws give you the right to bear my name and display my colors since I cannot prove that you are not mine. To teach me humility, the gods have condemned me to watch you waddle about wearing that proud lion that was my father’s sigil and his father’s before him. But neither gods nor men shall ever compel me to let you turn Casterly Rock into your whorehouse.”

Casterly Rock means a lot to Tyrion. For so long, he was considered less than a man and certainly not a true Lannister. He didn’t have much to call his own, even recognizing that his status was akin to Jon Snow being known as a bastard.

However horribly he was treated by his father and sister Cersei, Casterly Rock was still home for Tyrion and meant as much to him as Winterfell did to the Starks and the Iron Islands to Yara Greyjoy (even if that wasn’t as clear in the show as it was in the books). Claiming it as his own would have legitimized him in a similar manner as Gendry becoming Lord of Storm’s End, but Game of Thrones kind of forgot to mention it.

We could argue all day about Game of Thrones Season 8 and how much it had to pack in terms of information and development to get to its ending, but it’s safe to say the show cut corners on its character growth to do it. As Hand of the King, Tyrion still holds power and, as the last living Lannister, he can now claim Casterly Rock as his even if we never see it happen on screen.

Since it’s gone unmentioned, though, it remains a loose character thread. Has Tyrion assigned someone to protect Casterly Rock while he’s away? Is it just sitting there abandoned after Daenerys Targaryen’s siege in Season 7, Episode 3? With all the rush to get the HBO show to the finish line, George R.R. Martin’s upcoming two books may be the only way to get these answers.

Winds of Winter is expected by August 2020.