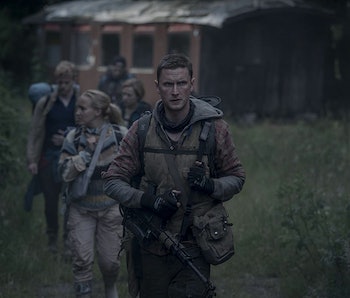 Netflix’s obsession with serialized science fiction isn’t limited to English-language shows like Stranger Things, Altered Carbon, and Maniac. The streaming giants done an impressive job introducing viewers to foreign series like the German time travel thriller Dark and Danish post-apocalypse series The Rain, which just released its second season on Netflix in May. If you’ve already binged through the latest episodes, you’re probably wondering when The Rain Season 3 will release on Netflix, and we’re here to tell you everything you need to know.

The Rain follows a group of survivors in Denmark who managed to avoid falling victim to a mysterious virus transmitted through rain. Six years after Danish citizens mysteriously began dying off quickly due to this virus of unknown origin, siblings Simone and Rasmus found a way to survive with their family and a small band of others as they search for safety and a cure. Things grow complicated when Rasmus is exposed to the virus but shows no symptoms, leading other to believe he could be the key to reversing the apocalypse.

In anticipation for the The Rain Season 3 release date, let’s take a look at everything we know so far about what Season 2 means for the show’s upcoming plot and other key details about the Netflix show’s future.

When Is The Rain Season 3 Release Date?

Netflix has yet to confirm if The Rain will be renewed for Season 3.

If Netflix does end up renewing the series, we can reasonably expect the show to return in May and possibly even May 2020. Season 1 was released on May 4, 2018 and Season 2 was released on May 17, 2019. If the renewal happens soon, then production on Season 3 could begin in mid-to-late 2019 with an expected release date following in the footsteps of past seasons.

How Many Episodes Will The Rain Season 3 Have?

It’s unclear how many episodes Season 3 will have since there has been no renewal or mentions of what is planned for the season. Season 1 had eight episodes but Season 2 scaled down to six. Given this, the Season 3 episode count could fall somewhere between six and eight episodes.

Is There a Trailer For The Rain Season 3?

There is currently no trailer or promotional images for The Rain Season 3. Any kind of footage or material for the new season will likely be released close to Season 3’s release date.

Who Will Return For The Rain Season 3?

For now, there have been no confirmations on which actors will definitely return for Season 3.

With the exception of Jessica Dinnage, who plays Christian Lea, we can expect to see many of our favorite The Rain characters return for Season 3.

If the season does go ahead, then we can count on actors Alba August (Simone), Lucas Lynggaard Tønnesen (Rasmus), Clara Rosager (Sarah), and Mikkel Boe Følsgaard (Martin) to return since the series ends with big questions about their fates open for further development.

How Does The Rain Season 2 Set Up Season 3?

Spoilers for The Rain Season 2 ahead.

Season 2 was tough on everyone. Rasmus’s relationship to the virus grew more complicated. His negative emotions like fear seemed to affect the virus within him and he would release a virus cloud that could kill anyone nearby. This happened more than once, making Rasmus a danger to everyone around him. In the season finale, Rasmus gave himself up to Apollon in an attempt to figure out what is going on with him while also fulfilling their initiative to understand and replicate Rasmus’s adaptations to the virus.

Simone, having turned on Rasmus in the season finale and shot him as revenge for the murder of their friends, has now roped Martin into tracking Rasmus down. She knows that Apollon can be a dangerous group and doesn’t want her brother to be exploited by them any longer.

Additionally, we learned that Sarah, Rasmus’s girlfriend who we thought had died after he exposed her to the virus, has actually returned from the dead and is exhibiting similar virus-based abilities to Rasmus. It’s possible that Sarah’s experience with the mutated virus could be used differently and/or to the benefit (rather than harm) of others.

What Big Questions Does The Rain Season 3 Need to Answer?

Right now, Season 3 has fans on the edge of their seats wondering just how big a threat Rasmus is to his family and friends as well as the rest of the world. Past seasons have made it clear that Rasmus’s immunity to the virus being spread through the rain makes him a person of interest, but understanding why his emotions trigger the virus into making him do terrible things, why the virus hasn’t killed him yet, and whether that makes him the source of a cure needs to be delved into further.

Season 2 also made it clear that Rasmus is potentially a danger to others. Even though he has surrendered to Apollon’s custody, he will still be dealing with the fallout of Season 2, which included the death of his girlfriend, Sarah (Rosager), and separation from his sister, Simone (August). Rasmus has gone on a killing spree in past seasons and Season 3 will certainly need to deal with the fallout from these deaths as further exploration into who or what Rasmus truly is.

And, of course, we still need more answers about the virus itself. It has spread from the rain to the rest of the environment in Season 2 and has begun to mutate in troubling ways. It seems like there are still no easy cures or clear-cut answers about just how much damage the virus is causing to the rest of the world, either, since Season 2 still implies it’s been contained to Denmark for the most part. If the virus is carried through the rain, it’s highly unlikely it has stayed within Danish borders which means Season 3 will need to address the global fallout of the virus.

How Can I Watch The Rain Season 3?

You will be able to watch The Rain Season 3 on Netflix. Currently, Seasons 1 and 2 are available to stream, so you can re-binge those seasons ahead of Season 3 to keep yourself fresh on where the story is going.

Stay tuned for more information about The Rain Season 3 as it emerges.