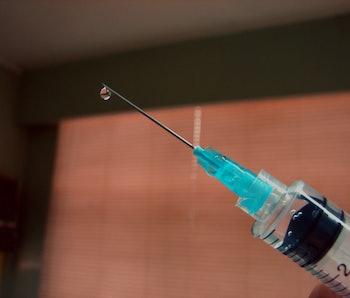 The 2019 measles outbreaks that have gripped several US states and far-flung countries are forcing the world to deal with troubling attitudes toward vaccines. With a readily available measles vaccine, the world has the tools it needs to stop the disease, but if we don’t change the way we use those tools very soon, even more people will be at risk by 2050, according to an analysis published Thursday in BMC Medicine.

In their paper, Piero Poletti, Ph.D., and Filippo Trentini, Ph.D., both researchers at the Bruno Kessler Foundation’s Center for Information and Communication Technology in Italy, predict that the US, the UK, Australia, Italy, and Ireland won’t see the end of measles any time soon. In fact, they say, the number of people at risk for measles exposure will increase by more than 50 percent by 2050 if things keep going the way they are now. In South Korea and Singapore, the other two high-income countries in their study, measles won’t gain ground.

“Our first results suggest that routine programs with current coverage levels in the considered countries are not enough to maintain herd immunity levels required in the next decade,” Trentini told reporters Thursday.

Poletti and Trentini’s model is based on the idea that not everyone in a population has to be vaccinated for the disease to actually be eliminated (which means that very few cases pop up now and then). Overall, they settled on an “elimination threshold” of 7.5 percent, which means that even if 7.5 percent of people in a country remain unvaccinated, measles would likely still be eliminated.

However, over the course of 50 years, they predict that the US, the UK, Ireland, Australia, and Italy won’t hit that elimination threshold under their current vaccination policies. In fact, we’ll actually slide even further away from that goal.

The authors argue that the countries outlined in their paper need some type of additional programs to really get vaccination coverage up to acceptable rates, and a school-based program is likely the best way to go about increasing vaccine coverage.

An ideal program would aim to vaccinate about 40 percent of already unvaccinated kids, maybe by educating parents. From there, they wade into controversial territory by posing the question, Should we make vaccines in schools compulsory?

In the paper, Poletti and Trentini make the case that compulsory vaccination may really be a powerful tool. Compulsory vaccines upon school enrollment aren’t the only way to approach getting more people vaccinated, though, and Poletti adds that he’s not even sure they may be necessary to reach the elimination threshold. But in the paper, they add that it’s a strategy to consider:

Recent policies aimed at increasing childhood immunization rates through the introduction of compulsory vaccination are certainly producing positive effects, by raising the proportion of children protected against measles.

"That is probably more related to political and social sciences.”

In the press conference on Thursday, the duo was careful to tread lightly around compulsory vaccination.

“That is something probably more related to political and social sciences, said Poletti. “However, by an epidemiological point of view, our analysis clearly showed that the vaccination of children at primary school entry could allow countries like the UK, Ireland, Australia, and the US to reach stable herd immunity levels.”

They have good reason to do this. Italy’s populist government has used anti-vaccine sentiment as a rallying point, and in August 2018, it removed compulsory vaccine laws. Since then, those laws have been reintroduced. In the United States, there is no national vaccine policy, but even hints of federal involvement have become a contentious talking point for some politicians.

Poletti actually addressed concerns that a compulsory vaccine policy could stoke backlash that would ultimately keep kids from getting vaccinated. He said that this hasn’t been the case in Italy, though he was careful to add that other countries may not work the same way. In the US for example, some bioethicists caution that some tend to recoil at the idea of compulsory vaccines despite the safety and efficacy of vaccines in general.

“As far as I know in Italy, the majority of people get vaccinated from this policy. Of course, there is the possibility that people’s trust in authorities can change overtime, but this is something relating more to communication,” he said. But he was careful to add, “I’m not an expert on this.”

Still, there’s no getting away from the fact that the severity of the measles outbreaks and the bleak future that they present in their model are crystallizing our need to change vaccination policy dramatically. The state of the 2019 measles outbreaks may be enough to put this idea on the table in a more serious way.

Background: In recent years, we witnessed a resurgence of measles even in countries where, according to WHO guidelines, elimination should have already been achieved. In high-income countries, the raise of anti-vaccination movements and parental vaccine hesitancy are posing major challenges for the achievement and maintenance of high coverage during routine programmes. Italy and France approved new regulations, respectively in 2017 and 2018, aimed at raising immunisation rates among children by introducing mandatory vaccination at school entry.

Methods: We simulated the evolution of measles immunity profiles in seven distinct countries for the period 2018–2050 and evaluated the effect of possible adjustments of immunisation strategies adopted in the past on the overall fraction and age distribution of susceptible individuals in different high-income demographic settings. The proposed model accounts for country-specific demographic components, current immunity gaps and immunisation activities in 2018. Vaccination strategies considered include the enhancement of coverage for routine programmes already in place and the introduction of a compulsory vaccination at primary school entry in countries where universal school enrollment is likely achieved.

Results: Our model shows that, under current vaccination policies, the susceptible fraction of the population would remain below measles elimination threshold only in Singapore and South Korea. In the UK, Ireland, the USA and Australia either the increase of coverage of routine programmes above 95% or the introduction of a compulsory vaccination at school entry with coverage above 40% are needed to maintain susceptible individuals below 7.5% up to 2050. Although the implementation of mandatory vaccination at school entry would be surely beneficial in Italy, strategies targeting adults would also be required to avoid future outbreaks in this country.

Conclusions: Current vaccination policies are not sufficient to achieve and maintain measles elimination in most countries. Strategies targeting unvaccinated children before they enter primary school can remarkably enhance the fulfillment of WHO targets.