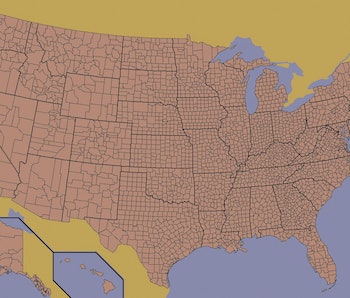 In the first five months of 2019, measles cases surged in the United States, hitting the highest numbers since the disease was officially eliminated from the US, and there’s still over half of the year left to go. In light of this growing trend, a paper published Thursday in The Lancet Infectious Diseases offers a warning, highlighting the US counties most at-risk for measles outbreaks in the future.

Our measles woes first began in Clark County, Oregon, just outside of Portland. From there, the cases have spiraled, totaling 764 as of this article’s publication, according to the CDC’s records. Building on this recent history, as well as Americans’ vaccination rates and travel habits, this new research letter identifies the 25 most likely candidates for future outbreaks. Associate professor of civil engineering and study co-author Lauren Gardner, Ph.D., has also created a web tool so anyone can take a look at their own home county and check the history of measles risk in their area.

Here are the 25 counties that stand out from the rest.

Coupled with numerous alarming local news reports, it’s easy to see a map like this and feel worried. It’s crucial to note that there’s a safe measles vaccine that’s 97 percent effective at reducing the risk of getting the disease. But despite that vaccine, measles has taken hold in numerous communities that Gardner says share two major risk factors: low levels of vaccination and large numbers of international travelers who have spent time in measles hotspots around the globe.

“You can’t have a measles outbreak if you don’t have both of those things. The more introductions you have and the lower vaccination rate you have, the worse you would expect the measles outbreak to be, and vice versa,” Gardner tells Inverse.

To track potential introductions, the team looked at the number of travelers going back and forth between several countries that also have ongoing measles outbreaks: India, China, Mexico, Japan, Ukraine, Philippines, and Thailand. The CDC also lists international travel as a risk for the spread of measles, and the authors note that travel is a huge issue for the the top four counties on the list, which contain major airport hubs like Chicago, Los Angeles, Miami and New York City.

But international travel is only one side of the coin. What makes measles stick around are low vaccination rates — which are becoming a contentious issue. As the United States has no federal vaccination policy, each state makes up its own rules. This allows some parents to not vaccinate their kids because they object on religious or philosophical grounds. Religious exemptions played a significant role in Rockland County, where measles took hold in an orthodox Jewish community. But secular anti-vaccine sentiment played a role in Clark County Oregon, which is within spitting distance of Portland — a previously identified “anti-vaccine hotspot.”

Since then, the neighboring state of Washington has actually changed its non-medical exemption policy — allowing only religious exemptions, and not philosophical ones. That’s one way of preventing outbreaks, but Gardner adds that education is another.

In 2019, measles took us by surprise. But the lessons learned from these outbreaks will prove valuable, if, next time, we can learn from early 2019’s mistakes.