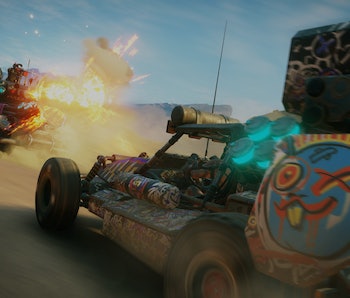 There’s a mission in Rage 2 where you have to become a celebrity, so you can get into an exclusive club, so you can talk to the richest person in the post-post-apocalypse where Bethesda’s new video game takes place. The only way to become a celebrity is to achieve star status in the entertainment industry, which means climbing the ranks of something called Mutant Bash TV (exactly what it sounds like) and winning the Mad Max-equivalent of a NASCAR race. But before you can do any of that, you have to sign a contract.

Yes, even after the apocalypse, game show contestants still have to sign away their rights before stepping into the ring. It might seem absurd, but studio director Tim Willits tells Inverse that these little flourishes are what set Rage 2 apart from the brown and dusty “cliché wasteland” seen in countless video games, movies, and TV shows.

"We joked about giant cockroaches that you can ride on top of, which we don’t have, but we totally could still have that if we want to do it. — Tim Willits

Instead, id Software (a division of Bethesda’s parent company, Zenimax) and Avalanche Studios set out to create an immersive first-person-shooter that captures what happens when the dust settles after the end of the world and things return to a twisted version of normal. The answer? You get ridiculous clothing (one character wears a wrestling championship belt over Bermuda shorts), and sleazy nightclubs, and unenforceable contracts.

“When the team originally put the contract in, I was thinking, ‘Why would you sign a contract? that’s so silly,’” Willits says. “But you know, the characters are trying to emulate the world. They’re trying to rebuild the world based on things that they’ve heard or seen or researched about the past, but they don’t always know exactly how to do it. So you sign a contract.”

Rage 2 begins 30 years after the events of Rage (2011), which was already set a hundred years after an asteroid smashes into the Earth and destroys all of civilization. There are no courts or laws, just a handful of small cities surrounded by a wasteland filled with mutants and bandits.

“There’s no way to enforce a contract in this world,” Willits says, “but they’re like, that’s what you do, because that’s what they did before the asteroid hit. It’s a great example of the characters trying to recreate the world, but kind of getting it wrong.”

Perhaps the best example of how Rage 2’s post-post-apocalypse feels like a funhouse mirror version of modern society is Klegg Clayton, a greasy mogul-turned-supervillain who uses his father’s wealth to build a corrupt empire of his own. Yes, it sounds a lot like Trump, but Willits swears that’s just a coincidence. “There was no there was no no political link in the game,” he says. “It was kind of just the way it worked out.”

Instead, Klegg represents an amalgamation of “cool and hip” things from our own culture, reassembled without any sort of context. You can identify the individual items of clothing he wears (the Bermuda shorts, the championship belt, the sports jersey, and the Guy Fieri jacket) but put together none of it works. Even removed from the rest of the game, Klegg’s character immediately makes it clear that something has gone wrong with society. How else do you explain this?

Rage 2’s post-post-apocalypse setting inspired everything from the characters to the color aesthetic. The game takes place in a bleak future that’s slowly improving. Sure, society may have collapsed, but at least people aren’t struggling just to find drinkable water or food anymore.

“In Rage 2, people aren’t starving, they’re just trying to live their lives,” he says. “So we evolved the landscape, which then led to evolving the characters that you find to be more colorful and more over the top, which led to vehicles being more colorful and over the top, which kind of led to this whole kind of attitude and feeling how we try to move away from the brown and dusty wasteland.”

“He loves funny accents and slang around countries,” Willits says. “And he’s Swedish. So we get his take on cultural American slang and accents from an outsider standpoint.”

Even the game’s marketing screams mutated rebirth with its neon pink color scheme, but in a few rare cases, id Software actually had to reel things in.

“The Rage universe is built in such a way that allows us developers to kind of have fun with it,” Willits says. “So if we had a cool idea, we were probably able to work it in. Like, we joked about giant cockroaches that you can ride on top of, which we don’t have, but we totally could still have that if we want to do it.”

Rage 2 is available now for PS4, Xbox One, and Microsoft Windows.