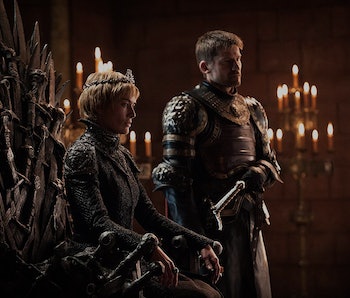 Knowing where Jaime Lannister’s allegiances lie on Game of Thrones has always been tricky. For a majority of the show’s run, Jaime’s been reliably in his sister-lover Cersei’s corner even when he wasn’t totally on board with her plans (family comes first, we guess), but GoT Season 8 has proven that Jaime’s loyalties can change.

For the season’s first three episodes, Jaime joined Team Targaryen in the fight against the Night King. Then, in Episode 4, “The Last of the Starks,” he seemed to switch back to Cersei’s side, though it’s unclear exactly what the Kingslayer has planned heading into Episode 5.

Here’s why we think Jaime will return to Cersei’s side like the loyal brother-lover he’s always been. Not convinced? Read up on why Jaime might actually be planning to kill Cersei right here.

Spoilers for Game of Thrones Episode 4 (and probably Episode 5) ahead.

Jaime is a man questioning what he really wants in the wake of the Battle of Winterfell. The world seems to present him with a fresh start with Brienne after the two finally consummate their relationship. Jaime’s also strengthened his relationship with Tyrion after spending weeks together in Winterfell fighting for their lives and hashing out their past. Jaime’s been given the chance to live a life outside of his sister’s control, but as his final conversation in “The Last of the Starks” proved, he has no interest in starting over. He wants to stay in his comfort zone.

The biggest clue in Episode 4 that Jaime will re-align with Cersei is his conversation with Brienne before he leaves Winterfell. Brienne begs him not to go, but Jaime rejects her plea, telling her just a few of the awful things he’s done for the sake of his love and devotion to Cersei:

“I pushed a boy out a tower window, crippled him for life. For Cersei. I strangled my cousin with my own hands just to get back to Cersei. I would have murdered every man, woman, and child in Riverrun for Cersei.”

Jaime ultimately concludes, “She’s hateful, and so am I.”

This feels like solid proof that Jaime is a masochist, eager to abandon his friends and allies and return to a person he knows is terrible. Cersei is a known quantity. and Jaime knows who he is when he is with her. He’s too weak to venture out onto his own at this point to try to start fresh.

There is a chance that Jaime’s inevitable return to Cersei’s side is merely for show, a calculated move to keep Jaime alive while getting close enough to Cersei to kill her. As a bonus bit of fan service, this would also fulfill the Valonqar Prophecy.

What’s far more likely is that Jaime, a man who never really had to think for himself, will return to the strong-willed woman he’s always known. Jaime without Cersei doesn’t make sense. Choosing Cersei over Brienne, who is clearly the better partner for him, is proof that Jaime will always choose his awful family over anyone else. Furthermore, he will choose the one person in his family he identifies with as a means of comfort and protection, and that person is Cersei.