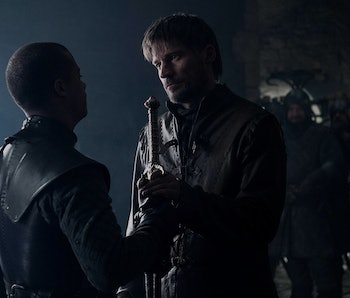 Spoilers ahead for Game of Thrones Season 8, Episode 3, “The Long Night.”

With the Great Battle of Winterfell in Game of Thrones’ rear view mirror and all eyes on the coming battle against Cersei at King’s Landing, we shouldn’t get too comfortable about where anyone’s loyalties lie. As we’ve seen in the past, allegiances can switch at the drop of a hat, and characters will often choose self-preservation over doing what is right. Given this, we have to wonder about the ever-malleable Jaime Lannister, whose loyalties will certainly be tested when Jon Snow and Daenerys Targaryen march what remains of their army (including him) south in Season 8, Episode 4.

It’s not that Jaime is still a villainous character, per se, but he’s worth keeping an eye on as we enter the last half of Game of Thrones Season 8. After all that he’s gone through, it’s clear that Jaime wants to be part of a team, not a man leading an army on his own with the fickle support of his sister-lover. But even after watching all he did during the Great Battle of Winterfell, fighting off the tireless White Walkers, we’re still not entirely convinced Jaime is a trustworthy team player.

In fact, we’re pretty sure Jaime’s allegiances are still flexible. He really sold it in Episode 2, “A Knight of the Seven Kingdoms,” when he made it clear that he “want[s] to fight for the living” and promised to serve under Jon and Daenerys. At the time, Jaime’s declaration about who he wants to fight for was quickly accepted, mostly because it was all hands on deck with the White Walkers bearing down on Winterfell and no time to spare. Recruiting good fighters was of the utmost importance.

Jaime worked overtime during “A Knight of the Seven Kingdoms” to make it look like he was a solid dude. He made it clear he wanted to stand next to Ser Brienne of Tarth on the frontlines when the White Walkers showed up (and he did exactly that). He also earned some major good guy points for knighting his longtime friend and ally, Brienne.

It feels fitting, after seven seasons of being loyal (albeit not entirely unwaveringly, but still) to Cersei and seeing how toxic that loyalty can be, that Jaime may have finally learned his lesson and chosen the right side. Feels like a really great ending, don’t you think?

But you have to remember that Jaime has bent no knees, sworn no oaths, and done nothing to indicate his loyalty to Jon and Daenerys is permanent. Crucially, Jaime is still laboring under the belief that he is expecting a child with Cersei — something Cersei can exploit from him whenever the need arises — and that could cause his loyalties to waver.

Additionally, his redeeming argument from Episode 2, “I want to fight for the living,” has the big catch that his statement includes all living beings in Westeros, including Cersei. Jaime could just as easily have been feigning loyalty to the North while secretly knowing he’d switch back if he managed to survive.

Even though this new version of Jaime is the one fans have long hoped he’d transform into, he’s always going to be a Lannister. Jaime has prioritized (and made it a point worth mentioning whenever he could) the interests of his family over the interests of others time and time again because if the Lannister family’s future and well-being are assured, so is his. With so much talk about where loyalties lie and questions over who is truly trustworthy coming to the surface (consider Sansa’s comments to Tyrion in Episode 3, “The Long Night,” where she mentions that a marriage between them would never work because she isn’t as loyal to Daenerys as he is) in this final season, it’s only natural that Jaime’s loyalties could shift once again.