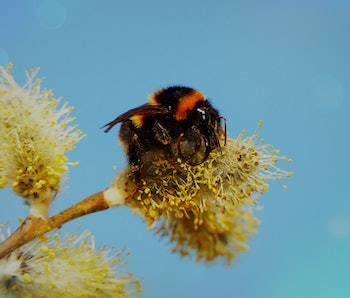 A scattering of colorless crystals is the most popular and widespread insecticide in the world. Called imidacloprid, it’s used to kill and control a variety of insects: termites, beetles, locusts, and stink bugs. It’s not, however, designed to kill bumblebees — the round, fuzzy, essential pollinators. Despite this lack of intention, it’s increasingly obvious that imidacloprid affects these bees, so much so that research released Monday revealed it can throw them off course.

Researchers write in the journal Ecology and Evolution that in a study setting, bumblebees exposed to imidacloprid in doses they would encounter in fields fly for significantly shorter distances and for less time than unexposed bees. Imidacloprid belongs to a class of neurotoxic pesticides called neonicotinoids, and it’s already banned in Europe because of its effect on bees. However, it is regularly used elsewhere in the world, including the United States. Whether the ban will apply to the United Kingdom after Brexit is currently uncertain.

Daniel Kenna is a first-year Ph.D. student at Imperial College in the United Kingdom and first author of the study. He tells Inverse that he hopes these findings shed a bit more light on how the foraging potential of bee colonies are affected in landscapes exposed to pesticides overall. In the United Kingdom, landscapes have been increasingly fragmented by agricultural growth over the last 50 years. How bee populations have changed in turn is a mixed bag: Two of Britain’s 25 bumblebee species have gone extinct, while eight species are endangered. Strangely, the two most common species have actually increased in number.

In this study, Kenna and his colleagues evaluated the bumblebee species Bombus terrestris audax. A commercial company provided three colonies, each containing a queen and around a hundred workers. The hives were then given a dose of imidacloprid that was equal to what they could encounter in, say, an American field. Their flight was tested with something called a “flight mill” — a spinning apparatus that’s a bit like a horrific chair swing ride. Small metal discs were attached to the backs of bees, which connected to magnets on the apparatus. The idea behind this device is that bees can fly in circles while scientists can observe them in a controlled setting.

Initially, the exposed bees were sent into a hyperactive state — flying much faster than the bees not exposed to the pesticide. However, after this increased energy expenditure, they rapidly slowed down. The results suggest that workers who feed on contaminated food when out foraging may not be able to make it back to the colony after exposure.

“We were pretty surprised by the magnitude of the effect on the flight endurance,” Kenna says. “Exposed workers only flew a third of the distance of non-exposed workers, and that could have serious implications in terms of the resources that foraging bees are able to reach.”

The hyperactive state was likely induced because neonicotinoids stimulate neuron activity, which makes sense because imidacloprid was made to mimic nicotine — which is a stimulant. Previous studies at Imperial College have found that neonicotinoids target the nerve receptors in insects that are similar to receptors targeted by nicotine in mammals. In turn, researchers have demonstrated that bumblebees exposed to these pesticides develop a taste for them, becoming addicted.

While more research is needed to know exactly why the pesticides made it so difficult for the bumblebees to fly, it is also known that imidacloprid, as well as the pesticide clothianidin, negatively impact bee nervous systems and literally change their genes. If bees of various species are going to survive into the next decade and pollinate our food, it’s likely that the regulation of certain pesticides is going to play a part.

The emergence of agricultural land use change creates a number of challenges that insect pollinators, such as eusocial bees, must overcome. Resultant fragmentation and loss of suitable foraging habitats, combined with pesticide exposure, may increase demands on foraging, specifically the ability to collect or reach sufficient resources under such stress. Understanding effects that pesticides have on flight performance is therefore vital if we are to assess colony success in these changing landscapes. Neonicotinoids are one of the most widely used classes of pesticide across the globe, and exposure to bees has been associated with reduced foraging efficiency and homing ability. One explanation for these effects could be that elements of flight are being affected, but apart from a couple of studies on the honeybee (Apis mellifera), this has scarcely been tested. Here, we used flight mills to investigate how exposure to a field realistic (10 ppb) acute dose of imidacloprid affected flight performance of a wild insect pollinator—the bumblebee, Bombus terrestris audax. Intriguingly, observations showed exposed workers flew at a significantly higher velocity over the first ¾ km of flight. This apparent hyperactivity, however, may have a cost because exposed workers showed reduced flight distance and duration to around a third of what control workers were capable of achieving. Given that bumblebees are central place foragers, impairment to flight endurance could translate to a decline in potential forage area, decreasing the abundance, diversity, and nutritional quality of available food, while potentially diminishing pollination service capabilities.

More like this
Science
Jan. 22, 2023
Humans didn’t evolve to live in cold — our survival is a lesson in ingenuity
By The Conversation, Kyoko Yamaguchi and Laura Buck
Science
Jan. 23, 2023
Elephants could be key to saving the planet — here’s why
By Tara Yarlagadda
Science
Jan. 18, 2023
Almost half of land animals will soon face extreme heat — here's why that's so scary
By Tara Yarlagadda
LEARN SOMETHING NEW EVERY DAY.
Related Tags
Share: