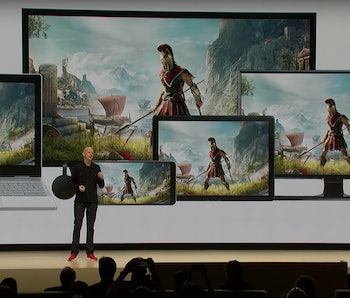 Superior graphics and computational prowess might not be enough to save the PlayStation 5 or Xbox “Scarlett” from the console-killing Google Stadia. But it’ll be close.

Unlike Sony and Microsoft’s next-gen consoles, Stadia will be powered by Google’s global network of data centers and a specially-made graphics processing unit (GPU). Majd Bakar, head of engineering for Stadia, claims that it will be the graphics card to rule them all. That’s because the Stadia graphics chip is said to deliver 10.7 teraflops of power — meaning it can complete 10.7 trillion operations per second. In debuting Stadia, Bakar noted that Stadia’s graphics computer power would be greater than the capabilities the PS4 Pro and Xbox One X —combined. But of course, this was not really an apples-to-apples comparison.

After all, Sony has confirmed the superior specs that will make it into PS5, rendering Stadia’s boast a bit out of date. In light of the rumored rumored capabilities of next-gen Xbox units — which will include some streaming access as well — many industry insiders and leaders, like 3D Realms’ Frederik Schreiber, think that consoles are more than equipped to fend off a challenge from little old Google.

Schreiber has been in the gaming industry for more than a decade. He led the development of the 2013 titles, Rise of the Triad and brokered deals to bring 30 of 3D Realm’s games to the online video game market place Steam. He believes the upcoming console generation will provide enough of a technical leap forward that he doesn’t see Stadia as “being relevant at this point.”

Of course, he’s just one developer — and Stadia has its share of industry cheerleaders too. Besides, Schreiber’s analysis misses one crucial point.

Mobile gaming was estimated to make up more than half of all gaming revenue in 2018, according to gaming market analytics firm Newzoo. That’s $70.3 billion from people playing games on their tablets and smartphones that don’t mind games that aren’t running on top-of-the-line graphics.

Stadia and other cloud gaming services have promised to do away the expensive hardware and hours of download time that comes along with owning a console or PC gaming rig. This will lower the barriers to entry, so mobile-first gamers can play games like Assassin’s Creed: Odyssey without having to shell out hundreds for the lates console.

While Schreiber’s comments might ring true for diehard gamers that want nothing less than the cutting edge, sales stats show that the consumers Schreiber describes are actually in the minority. Stadia is tapping into the fact that everyone has a screen in their pocket now, and a big portion of those users enjoy playing games on them.

The wave of cloud gaming service might not win over hardcore video game fanatics. But it will expand the horizons for millions of mobile gamers that want to try out popular titles, regardless of how crisp their graphics are.

More like this
Gaming
Sep. 21, 2022
25 years ago, the most ambitious puzzle platformer changed video games forever
By Robin Bea
Gaming
20 hours ago
Everything you need to know about the action-packed Stellar Blade on PS5
By Willa Rowe
Gaming
Sep. 22, 2022
The most fascinating work sim on PS5 makes drudgery beautiful
By Robin Bea
Related Tags
Share: