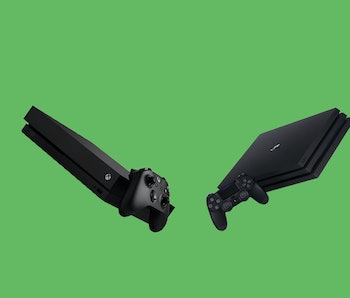 Sony has confirmed that the PlayStation 5 will attempt to set a new bar for graphical capability with improvements like eye-tracking that look specifically to VR, according to a revealing interview from Mark Cerny, the lead system architect for the PS4, in Wired. With those details out in the open, we’re starting to get some chatter about how Microsoft’s Xbox “Scarlett” consoles will respond.

Ainsley Bowden of Seasoned Gaming recently tweeted that he’s heard rumors from “sources for [Microsoft and] Xbox info that are very reliable and have been accurate for years on leaks.” As you may recall, Microsoft is gearing up to launch two new gaming systems, one code-named “Lockhart” and a higher-end device that’s been code-named “Anaconda.” Bowden’s sources spoke only to the Anaconda variant, which, to support its higher price tag, will come with all of the bells and whistles Microsoft can muster.

On April 17, Bowden tweeted that industry rumors had given him an interesting theory about how Xbox Anaconda will one-up the PS5.

“The PS5 hardware details (so far) were exactly what we were hoping for; even beyond what many were expecting,” he tweeted. “Multiple insiders have now confirmed it’s true Xbox “Anaconda” will be more advanced as rumored. All this means is next year is going to be amazing for fans of both.”

Bowden didn’t mention any specifics, but for the Xbox Anaconda to top the PS5 spec-wise, as Bowden’s sources predict, it will need to pack a serious punch. Cerny teased that the PS5 will sport a solid-state drive, and support 8K resolution and “ray tracing,” a graphical rendering technique that is presently limited to gaming PCs.

But most notably, the PS5 will also support 14 teraflops of graphical power, according to an epic list of leaks posted to Pastebin, which means it can complete 14 trillion operations per second. That’s more than triple the capabilities of the PS4 Pro. To one-up the PS5 in terms of graphical capabilities, the Anaconda device’s GPU would probably need to support even more than 14 teraflops, though some of Sony’s other innovations — like its plans to support ray tracing — could still give it a bit of wiggle room.

As it stands, the Xbox One X comes with 6 teraflops of graphical potency and supports 4K. Microsoft will need to more than double the Xbox Anaconda’s graphical capability and introduce 8K support if it wants to future-proof its console against Sony’s.

Bowden stated that he hopes to see 4K games locked in at 60 frames per second in the next Xbox console. That means the system would handedly run 4K games without having to reduce its frame rate to suboptimal levels. Bowden’s predictions are similar to some remarks made by Phil Spencer, Microsoft’s Xbox chief, about his division’s priorities for the next-gen consoles.

“The same team that delivered unprecedented performance with Xbox One X is deep into architecting the next Xbox consoles, where we will once again deliver on our commitment to set the benchmark for console gaming,” he said during Microsoft’s E3 keynote in 2018.

But unlike Sony’s PS5, whose graphical prowess looks to VR, Microsoft is expected to prioritize cloud gaming with its new consoles, a way to leverage its upcoming xCloud streaming service.

Ironically, despite their distinct focuses on streaming and VR, respectively, Microsoft and Sony offer notably similar visions for hardware improvements, with similar benchmarks for improved graphics, rendering, and resolution. It leaves open an argument for owning multiple consoles, one for playing in immersive VR and one for primarily multiplayer gaming and live-streaming. That’s a boon to the console makers, obviously, but it will also be very good for gamers.

More like this
Gaming
22 hours ago
The 10 best PS Plus Essential, Extra, and Premium games
By Joseph Yaden
Innovation
6.24.2022 5:00 AM
Beam-steering radio technology could help autonomous cars finally hit the road
By Sascha Brodsky
Gaming
23 hours ago
God of War Ragnarok theory reveals a shocking return to a familiar setting
By Joseph Yaden
Share: