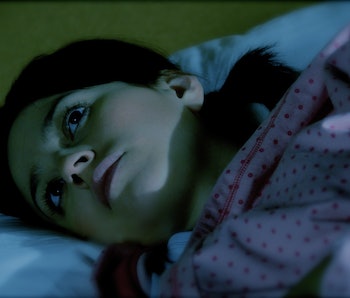 In the last few minutes before sleep, the day’s blunders creep into the margins of the imagination. Even good sleepers will feel their stomachs lurch when they’re reminded of an embarrassing moment during the day. But new research published Thursday in Brain reveals that insomniacs feel that sting even more acutely. Memories from the distant past continuously plague them during evening hours, keeping them awake, as an embarrassing karaoke experiment shows.

In his paper Eus van Someren, Ph.D., head of the Netherlands Institute for Neuroscience’s department of Sleep and Cognition and his team present evidence for a connection between emotional experiences and insomnia. Using a combination of stress analysis, brain imaging, and an embarrassing karaoke experiment, he makes the case that insomniacs actually experience emotional distress differently than good sleepers. That extra level of distress, he tells Inverse, then pushes them into a vicious cycle of anxiety and sleeplessness:

".. we have the impression that if you are not good at shaking off emotional tension, then you are more likely to become an insomniac.

“This isn’t solid yet, but we have the impression that if you are not good at shaking off emotional tension, then you are more likely to become an insomniac,” van Someren explains. “Then, once you are an insomniac you get in this sort of vicious cycle.”

To examine the potential link between emotions and insomnia, van Someren had 20 good sleepers and 37 insomniacs participate in two trying tasks: first, each person described an embarrassing moment that had happened to them in the past, and then they sang karaoke, which allowed the researchers to see how the participants’ brains responded to real-time embarrassing situations. The participants chose between “Silent Night,” “Gloria in Excelsis Deo,” or the national anthem of the Netherlands, then belted out the tune with headphones on while researchers recorded them.

Later, the participants had to recall the past embarrassing episode and then listened to 16 grueling seconds of their unaccompanied karaoke recordings. All the while, van Someren and his team analyzed their brain activity and stress levels. van Someren notes that most people’s recordings were highly embarrassing.

"They don’t like listening to their own voice, but if it’s out of tune and out of beat, they like it even less."

“For most people, this is a very embarrassing experience,” he says. “They don’t like listening to their own voice, but if it’s out of tune and out of beat, they like it even less.”

Interestingly, the good sleepers and the insomniacs showed similar levels of distress when they listened to their karaoke recordings, suggesting that they respond equally poorly to being humiliated in the moment. But there was a significant difference between the groups when they recalled their past experiences, suggesting that the insomniacs internalized embarrassing memories differently.

The insomniacs still had high levels of activation in an area of the brain involved in emotional processing called the anterior cingulate cortex when they recalled their past experiences, while the normal sleepers didn’t. This represents an “overlap” in neural circuitry, the paper notes, suggesting that they experienced past embarrassments similarly to being actively humiliated.

But what really excited van Someren is that the activation of the anterior cingulate cortex fir well with his earlier work showing certain genetic markers of insomnia specific to that brain region. “This particular area of the brain expresses a lot of insomnia risk genes,” he explains. “There is some vulnerability there.”

This overlap in activation, he says, is actually a product of sleeplessness that plagues insomniacs. Even good sleepers may lie awake now and then reliving a cringeworthy experience, but when they wake up after finally getting some rest, they usually feel better. Insomniacs, however, often don’t feel better because they end up losing sleep that helps process those past emotions in a healthy way.

He suggests imagining you’ve witnessed a person involved in a car crash at an intersection. At first, the experience is upsetting, and you might tremble or have an elevated heart rate. When you go to sleep that night, the brain will begin to process that event in two ways. It will, hopefully, retain the key lesson to look both ways before crossing. Second and more importantly, it will forget the feelings of anxiety that accompanied watching the carnage unfold. “These are two things that sleep processing helps with,” he says. “It helps you to remember the effects, and it helps you to forget the emotional or physical experience with it.”

Insomniacs may be predisposed to feeling highly tense or anxious in the first place, which may keep them up at night, he says. That intermittent and restless sleep can contribute to “insufficient long-term adaptation to emotional memory.” In other words, they lose the crucial sleep required to help them shake off emotions, which makes them remember what it was like to see that car crash more viscerally, and, in turn, may lead them to lose more sleep.

Given previous work showing that anxiety can be both a cause and effect of sleeplessness, van Someren’s study adds more evidence to a developing idea. Sleep and emotional health go hand in hand, even during waking hours.

More like this
Mind and Body
Jan. 21, 2023
Procrastination study suggests a link to shoulder pain, bad sleep, and more
By Eva Skillgate, Alexander Rozental, Fred Johansson and The Conversation
Mind and Body
5 hours ago
How Your Diet Could Help (or Hurt) Your Aging Brain
By The Conversation and Sara N. Burke
Mind and Body
Feb. 1, 2023
Why the future of periods could be none at all
By Elana Spivack
LEARN SOMETHING NEW EVERY DAY.
Related Tags
Share: