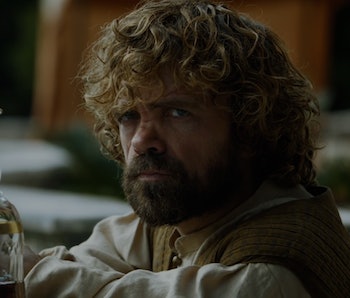 Tyrion Lannister would agree he’s lived longer than he ever thought possible. The journey he’s had on Game of Thrones is unprecedented, and he’s made himself indispensable by allying himself with Daenerys Targaryen.

However, indispensable doesn’t mean anything on Game of Thrones, not when death lurks around every corner. Cersei put out a hit on Tyrion and Jaime in Episode 1 of Season 8, and an intriguing new theory posits that Tyrion will die at the hands of Bronn’s crossbow to parallel the way the Hand of the Queen killed his father, Tywin, back in Season 4.

Redditor u/SmoOoKzZ has compiled a list of past deaths that suggests there’s a correlation between characters’ weapons of choice and how they were later killed. For example, Lady Olenna poisoned Joffrey and then died by poison. Similarly, Ramsay Bolton ordered his hounds to kill his stepmother and infant brother, and later, Sansa sicced Ramsay’s own hounds on him.

Redditor u/SmoOoKzZ claims Tyrion’s death has long been foreshadowed and that it will finally come to pass in Season 8.

“Tyrion Lannister kills his father with a crossbow,” they write. “Now will he get killed by Bronn with the crossbow?”

The theory is highly plausible given that we’ve already witnessed Bronn being handed the weapon that will presumably kill both Jaime and Tyrion. While Tyrion could very well die by crossbow (though Cersei could be the one to die first), it’s hard to imagine Bronn killing his old friend.

After all, Bronn has a long history with the Lannisters, and Tyrion worked with and trusted him before he befriended Jaime later on. However, Bronn isn’t exactly 100% loyal and could do it for the money — possibly even before the Great Battle of Winterfell in Episode 3.

While killing Tywin was arguably Tyrion’s biggest moment on the show, let’s not forget that the Hand of the Queen also killed Shae by choking her to death right before he moved on to his father. Tyrion and Shae’s relationship went on for awhile, but Tyrion felt betrayed when she betrayed him and picked up with his father. So could Tyrion actually end up being choked to death?

Shae aside, this fan is definitely onto something. Game of Thrones has been known to foreshadow events long before they happen (like Ned’s beheading and the fact that Jon Snow was never actually a Stark), and Episode 1 of Season 8 is a prime example of callbacks to the pilot. There’s no telling what could happen, but there’s bound to be at least one Lannister death this season.