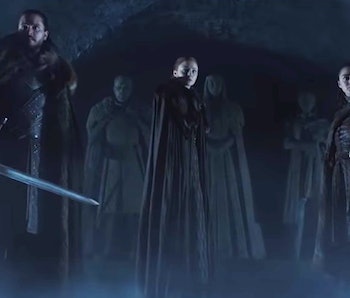 Game of Thrones Season 8, Episode 2 is set to lead us straight into the Great Battle of Winterfell, an epic fight between “the greatest army the world has ever seen” and a horde of frostbitten zombies, but have we ever stopped to ask why the Night King is so hell-bent on taking Winterfell in the first place? It’s possible he’s after one character in particular (the actor did reveal he has a “specific target”), but what if that target isn’t a person in Winterfell but the location itself.

Could the Night King be after something hidden deep in the crypts of Winterfell? It’s common knowledge the crypts are actually larger than Winterfell, and while the castle is heated by natural hot springs beneath it, the crypts remain cold. A teaser for Game of Thrones Season 8 even featured the crypts heavily. Something mysterious is definitely going on down there, but what?

Here are three theories that could explain why his undead army is marching in this specific direction during Game of Thrones Season 8 leading up to the Great Battle of Winterfell.

Possible spoilers for Game of Thrones Season 8 ahead.

3. The Winterfell Crypts Are Full of Dragon Eggs

Let’s kick things off with a banger. Is it possible that a trove of dragon eggs could be hidden beneath Winterfell castle? That may sound like pure fantasy (even for a fantastical show like Game of Thrones), but there’s actually a few clues in the books to support this theory.

The primary evidence comes in two books written by George R. R. Martin that provide additional backstory rather than moving the actual plot forward: The World of Ice and Fire and, more recently, Fire and Blood. Both books feature passages from The Testimony of Mushroom, the writings of a dwarf court jester in King’s Landing during the Targaryen reign.

According to Mushroom, one of the Targaryen’s dragons, Vermax, actually laid a bunch of eggs in the Winterfell crypts. In the books, Mushroom’s stories, which often focus on romantic affairs and other scandals, are mostly written off as hearsay, but some fans have latched onto this claim in particular.

If there are dragon eggs in the crypts, that would certainly explain why the Night King is headed there. After all, what’s better than one ice dragon? A whole herd of them. In that case, humanity’s only hope for survival really is fighting off the White Walkers at the Great Battle of Winterfell. Unless Daenerys can somehow get them to hatch first…

2. The Night Queen Is Imprisoned in the Crypts of Winterfell

In HBO’s Game of Thrones, the Night Queen is just a far-out fan theory based on the idea that the Night King may eventually take a bride (popular guesses include Cersei and Daenerys). However, in the books there’s an actual Night’s Queen, but, well, it’s a little complicated.

You see, the Night’s King in George R. R. Martin’s A Song of Ice and Fire series is totally different from the Night King on Game of Thrones (Martin even said he prefers his version). The Night’s King was the 13th Lord Commander of the Night’s Watch who fell in love with what was probably a female White Walker (something we’ve never seen on the show) and proceeded to go homicidally crazy before the Starks and Wildlings eventually teamed up to take him down.

So, while there is some sort of precedent for a Night Queen, it’s not exactly what Game of Thrones fans are probably imagining. Still, if there is some sort of female White Walker locked up under Winterfell, that would definitely explain why the Night King is making a beeline for the castle (and why the crypts are so cold).

This theory comes courtesy of redditor u/cantuse, who shared it five years ago and does an incredible job of breaking down the importance of the harp and what it could mean for the story. The long and short of it is that Jon’s father (not Ned, his real father) had a mythical silver-stringed harp that somehow ended up in Lyanna’s tomb. It’s unclear how (u/cantuse has a few interesting ideas), but if it’s there, it could have some big implications.

For one thing, discovering the harp would be a powerful moment in Game of Thrones Season 8. Just picture Jon, distraught at the news of his true lineage, visiting Lyanna’s crypt. There, he finds Rhaegar’s harp, which only serves to confirm what he already knew was true. The scene practically writes itself.

But there’s more. As u/cantuse explains, the harp was also said to be capable of “waking a dragon from stone.” That could be a metaphor for Jon Snow’s realization that he’s actually a Targaryen, but maybe it’s a bit more literal.

Assuming that those stories of dragon eggs hidden in the Winterfell crypts are true, then maybe that’s only half of the equation. The harp might be required to bring those long-forgotten eggs back to life. In that case, it’s the most important musical instrument in all of Westeros, and whoever finds it first could soon command an entire fleet of dragons.

Then again, maybe it’s just a harp, a cold empty crypt, and a homicidal ice zombie.