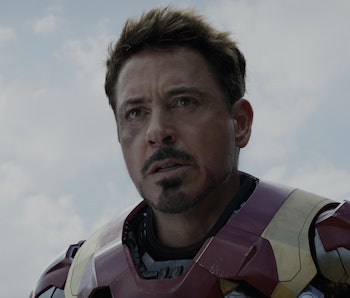 Tony Stark has been heavily featured in Avengers: Endgame trailers, so it’s clear that he eventually makes his way back to Earth. In a minute-long scene released by Marvel, however, the Avengers who survived Thanos’ Snap gather for an important team meeting, but there’s no sign of Tony. Now, a new Avengers: Endgame theory may explain his absence and how it will affect the rest of the movie.

Redditor u/GoesOff_On_Tangent posits a theory that claims Tony is still off-world at the beginning of Endgame and doesn’t join the Avengers until after they try (and fail) to defeat Thanos a second time. The theory aligns with the footage screened at CinemaCon, which showed the Avengers hatching a plot to find Thanos and undo the Snap. The team could very well stop to pick up Tony on the way to Thanos’ hiding place, but that’s assuming they know where he is and if he’s still alive.

“All the Avengers are under the assumption that Tony is dead,” writes u/GoesOff_On_Tangent. “Nobody’s heard from him, so they think he either died in the snap, died while battling Thanos, or something else. Nobody on earth has any idea of what happened in space or on Titan.”

They go on to suggest that the Avengers will head off to fight Thanos at the Garden (that grassy place where we saw him chilling in the first Endgame trailer). However, it seems obvious that this plan will backfire. This theory imagines that Thanos will use the Mind Stone to control Captain Marvel, but there are plenty of other ways their initial attack could fail.

While Tony is shown speaking with Captain America in the last Endgame trailer and walking alongside the rest of the Avengers in another, dressed in their new white suits, the majority of the footage has shown him to be on his own. But if the Avengers don’t know he’s alive or where he is, how is he able to get back to Earth?

Well, the theory claims that Tony will figure out a way back on his own. It’s not far-fetched since Tony, with the help of Ho Yinsen, built armor to escape Afghanistan in Iron Man. After all, Tony has the brains, skills, and hopefully the resources, to be able to escape space and return to Earth. The theory further explains that Tony’s return will be just in time for Ant-Man’s arrival at the compound and right before the Avengers decide to time travel.

Then there’s Nebula, who’s also made her way to Earth (though exactly how that happens remains to be seen) and eventually works alongside Tony, possibly to create another Infinity Gauntlet to defeat Thanos.

When and under what circumstances Tony actually rejoins the Avengers are unclear, but it’s more than obvious that it’ll take the strength and intelligence of every team member to defeat Thanos once and for all.