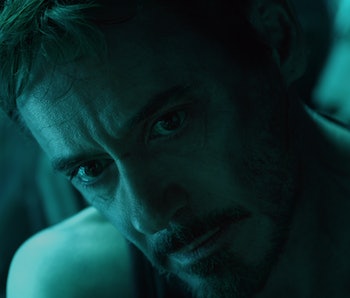 In the latest clip from Avengers: Endgame, the team has hatched a plan to go after Thanos and somehow reverse the Snap from Avengers: Infinity War. At this point, most fans assume that time travel will be involved and the Avengers will be collecting the Infinity Stones from several moments in the past. However, a leaked image of an Infinity Gauntlet toy fuels another popular theory that Tony Stark could be making his own version of the Infinity Gauntlet as well.

Possible spoilers for Avengers: Endgame ahead.

The latest Hasbro toy leak (courtesy of Reddit) includes a version of Thanos’ Infinity Gauntlet with some striking differences. For one thing, it looks a lot more mechanical than the version with saw in Infinity War. It’s also silver rather than gold with some striking red accents. Overall, it looks a bit like what you might imagine a replica of the original gauntlet designed by Tony Stark might look like.

Of course, toys tied to big Marvel movies don’t always get all the details right, but it seems like a stretch to think that a company would design such a drastically different version of the gauntlet for no reason. Especially after previous Endgame toys showed Thanos with the traditional gold gauntlet.

Here’s what the Iron Man-themed red and silver gauntlet looks like:

The silver gauntlet provides an added boost to the theory that Avengers: Endgame will focus on a mission to get all the Infinity Stones and undo the Snap. This could involve facing Thanos head on, as a recent clip suggests, or traveling back in time to grab the stones before the Mad Titan even gets them. Either way, creating a new gauntlet will probably be necessary if the Avengers actually want to use those stones once they get them. Especially after what happened to the Infinity Gauntlet.

The last time we saw the Infinity Gauntlet, it looked damaged beyond repair. But in the sneak peek footage from Endgame, though, it was revealed that Thanos had used it again not long after the Decimation, so there’s no telling how much worse off it is. It’s important to point out that not everyone is powerful enough to actually wield the Infinity Gauntlet. One theory suggests that Thor could be the one to use it. However, if Tony was the one to build the new gauntlet, then maybe he’ll be able to handle its power too.

Although it’s made clear that Nebula somehow made her way to Earth and is key in helping the Avengers find Thanos, the Endgame trailer hinted that she could be working on something with Tony while they were out in space. It’s a brief glimpse, but they’re both looking down and Tony is holding goggles. Given that Nebula was closest to Thanos and might know things about the gauntlet that no one else does, she could very well be assisting Tony in creating a new Infinity Gauntlet. It wouldn’t be outside the realm of possibility, but only Endgame will be able to provide the answers.