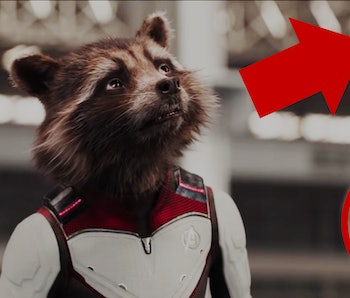 Marvel released a new clip from Avengers: Endgame on Thursday, and while it intentionally reveals one important detail from the movie, it may have also accidentally leaked an even bigger spoiler. We know the Avengers are splitting up in Endgame to beat Thanos, but now we may know how they’ll do it, too.

In the image above, you can clearly see Rocket looking up at the person to his right. They’re both wearing those cool new red and white Avengers suits, and the hand in the top-right corner of the frame is outfitted with some sort of gadget. However, in a subsequent shot that shows the entire team engaging in a classic hand stack, there’s no gadget on any one’s hand, though one Avenger’s glove does seem to feature an empty slot where that doohickey could go.

Marvel has a long history of editing spoilers out of its movie trailers (or adding in fake ones). When Infinity War trailers showed the final fight between Thanos and Captain America, the Infinity Gauntlet was even edited to remove some Infinity Stones so audiences wouldn’t know how many the Mad Titan had collected.

In this case, Marvel seems to be hiding something again, but it’s unclear what. Earlier leaks, including a Funko Pop version of Iron man, also showed a similar device on his hand. Fans have theorized that it could be used to travel through the quantum realm or perhaps generate disguises to blend in if the Avengers travel back to specific moments in time during Endgame.

It’s also unclear exactly whose hand we’re looking at. The way this new clip is edited, it’s impossible to say who’s standing where. Based on the two images, it definitely doesn’t seem like Iron Man is directly to Rocket’s left, but it’s possible the characters move around at some point in between those two shots. (Also, who could that big, beefy arm in the hand-stack shot belong to? Thor?)

It’s also possible multiple team members have been outfitted with the same gadget. After all, we’ve also seen leaked toy versions of Captain America in Endgame with a similar device in the same spot. Or it could just be an updated version of Ant-Man’s suit controls.

Either way, Marvel is clearly trying to hide something important, but what that is remains a mystery. We’ll just have to wait until Avengers Endgame’s release — or the next new clip — to find out.