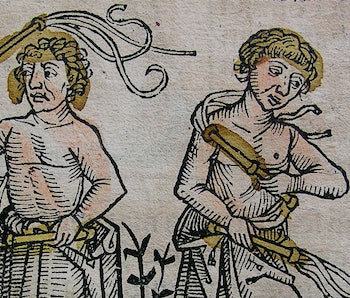 The dangers of spreading blood-borne viruses like HIV by sharing needles are well-known, but a new CDC-reviewed case study points to some other sharp implements that should make that list: rods, whips, chains, and knives — all of which make up the tool kit for an ancient ritual that can bring some unexpected consequences.

In a report released on Wednesday, scientists in the UK reveal that 10 patients have contracted a rare and serious virus due to the practice of self-flagellation. Self-flagellation may seem like the kind of practice that’s reminiscent of monks in medieval manuscripts, but it still happens — though the authors report that there aren’t reliable statistics on how common the practice is. This report tells the story of 10 UK men, all of whom participated in different kinds of self-flagellation. At the end of the day, they developed human T-cell lymphotropic virus type-1 or HTLV-1.

The National Institutes of Health reports that 95 percent of people who contract HTLV-1 have no symptoms. But for those who do, it’s no joke. In the report, the authors estimate that between two and six percent of people infected with the virus develop leukemia, a bone cancer with a median survival rate of eight to 10 months, even when treated. There’s also no cure for HTLV-1 — it sticks around for life.

The report, which comes from a team of scientists from Imperial College London and St. Mary’s Hospital (also in London) describes one case in detail. That patient’s self-flagellation involved multiple implements, including a knife and a zanjeer, a wooden implement that comprises multiple chains and blades. That patient had no previous risk factors that would make him likely to contract the infection — a history of injection drug use, for instance — so the authors believe that they truly can trace the case to his self-flagellation practice.

He had engaged in zanjeer voluntarily during childhood outside the United Kingdom and continued this practice. In the United Kingdom, the blades were soaked in a bucket containing an over-the-counter antiseptic solution, along with the blades of other men conducting the practice simultaneously. In the previous few years, his practice had also involved striking his forehead with a knife, which was subsequently shared by other men.

The doctors make it clear that the spread of the disease has everything to do with the way the implements of self-flagellation are stored, cleaned, and, unfortunately, shared. They add that “most [of the patients] reported the sharing of blades.”

Though the disease seems to be affecting the self-flagellators due to sharing of implements, it can also be passed to sexual partners, as well as from mother to child during childbirth. So even if these patients originally got the disease from coming into contact with open wounds or using the same weapons, they put those who don’t participate in the practice at risk.

Even more importantly, six of the cases were identified during blood tests when the men were intending to donate blood. Obviously, the presence of HTLV-1 in their blood cells put an end to that endeavor, but the authors suggest that this case highlights a new reason clinics should screen for the rare and often overlooked virus.

“In the United Kingdom, clinics that screen for these viruses do not ask about the practice and do not screen for HTLV,” they write.

The case histories of 10 people is still a small sample, but the CDC’s review of this case points out that it might be worth watching. At any rate, asking potential blood donors about self-flagellation is probably a good idea, as medieval as it might seem.

More like this
Mind and Body
8.12.2022 10:45 AM
Pig collagen helped restore eyesight in people who were blind — study
By Miriam Fauzia
Mind and Body
8.15.2022 10:00 AM
Sunscreen is crucial for public health — it must be safe for the environment, too
By Karen Glanz, Robert Richmond and The Conversation
Mind and Body
8.14.2022 11:00 AM
Wastewater surveillance helped us track Covid-19. Can it work for monkeypox?
By Mark Kreidler and Kaiser Health News
Related Tags
Share: