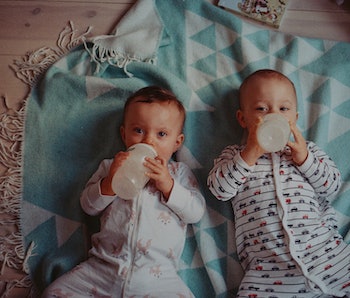 A pair of Australian-born twins just became some of the most unique humans on Earth. Neither identical nor fraternal, they are semi-identical — also known as sesquizygotic, a condition so rare that word processors will flag the term as a typo.

These two babies, whose rare genetic status was discovered by doctors before they were born, are now 4 years old and remain anonymous. They are only the second set of semi-identical twins known to doctors, and they were the first set to be identified through genetic testing before they were born.

The twins’ doctors and the scientists who examined them outlined the details of the extraordinary case in a paper published Wednesday in the New England Journal of Medicine.

“The mother’s ultrasound at six weeks showed a single placenta and positioning of amniotic sacs that indicated she was expecting identical twins,” said Nicholas Fisk, Ph.D., who led the team that cared for the mother and twins at Royal Brisbane and Women’s Hospital in 2014. “However, an ultrasound at 14 weeks showed the twins were male and female, which is not possible for identical twins.”

This led Fisk’s team to investigate exactly how this strange phenomenon could happen.

In the above diagram, the team outlines what probably happened:

After the two sperm cells fertilized the single egg cell, each pronucleus — one from the egg and two from the sperm cells — duplicated its genome. Then, a tripolar spindle apparatus formed among the three sex cells, a three-way version of the typical two-way spindle that would form during the first cell division that happens after fertilization. As the genomes then replicated, this process formed three cells: two that came from both the mother and one of each of the sperm cells, and one that came from the two sperm cells. Normally, such an arrangement doesn’t work out, and the fertilization would stop there, without resulting in a successful pregnancy.

But eventually, the cells formed from both parents won out over the single-parent cells, and they began to develop in the typical way. Then a twinning event — a division — occurred from these heterogeneous cells, much like what happens with typical identical twins, and they split into the two embryos. As a result, the fetuses ended up with 100 percent of shared DNA from the mother since it all came from the same egg, but only 78 percent shared DNA from the father since the paternal DNA came from different sperm cells.

By comparing the twins’ genome against a worldwide database of fraternal twins, the researchers tried to find out if perhaps another set of semi-identical twins had flown under the radar. But they didn’t find any, meaning that the Australians are quite special indeed.

Abstract: Sesquizygotic multiple pregnancy is an exceptional intermediate between mono- zygotic and dizygotic twinning. We report a monochorionic twin pregnancy with fetal sex discordance. Genotyping of amniotic fluid from each sac showed that the twins were maternally identical but chimerically shared 78% of their paternal genome, which makes them genetically in between monozygotic and dizygotic; they are sesquizygotic. We observed no evidence of sesquizygosis in 968 dizygotic twin pairs whom we screened by means of pangenome single-nucleotide polymor- phism genotyping. Data from published repositories also show that sesquizygosis is a rare event. Detailed genotyping implicates chimerism arising at the juncture of zygotic division, termed heterogonesis, as the likely initial step in the causation of sesquizygosis.

Correction, 2/28/2019: A previous version of this article incorrectly stated that the twins shared 78 percent of their genome, when in fact they share 89 percent. That version also stated that the three cells formed during fertilization included one just from the mother, when in fact the genetic material in this cell came from the two sperm cells. It has been update to include the correct information on these two points.