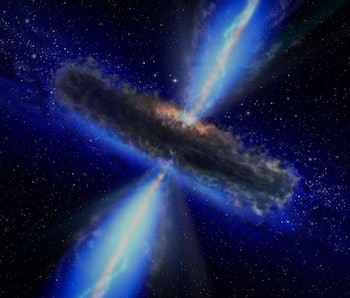 When it comes to origin stories,our universe has a good one. The broadly accepted theory is that between 12 and 14 billion years ago, the visible universe was the size of a grape.

Then, with a bang, it potentially exponentially expanded from a hot dense state into our vast cosmos. While the idea of the Big Bang has been generally accepted since 1980, we still don’t have an idea of how this massive inflation actually happened.

That’s where the SPHEREx mission comes in. Last week, NASA announced a new project that claims the epic title of: Spectro-Photometer for the History of the Universe, Epoch of Reionization, and Ices Explorer.

SPHEREx a $242 million pursuit that will launch in 2023. For two years, the shuttlecock-shaped observatory will circle Earth in an orbit twice as a high as the International Space Station. It’s a mission designed to address three important questions, including: What is the origin of the universe?

“SPHEREx will probe inflation, the rapid expansion of space that is thought to have occurred moments after the Big Bang,” principal investigator James Bock of Caltech tells Inverse. Bock explains that, in addition to rapidly expanding the universe, inflation produces “variations in density that eventually go to the seed the places where galaxies form.”

The distribution of galaxies today is sensitive to the properties of inflation. In order to determine the nature of these variations, Bock and the team will do what other explorers have done before them — make a map.

SPHEREx is designed to survey the entire sky four times, in the process gathering data on 300 million galaxies as well as more than 100 million stars in 96 spectral colors. The observatory is also taking pictures in infrared — electromagnetic radiation that’s invisible to the human eye. Infrared light can be measured as the heat that comes off of an object. In turn, this project is looking at the heat of the universe.

Allen Farrington, the project manager of SPHEREx, explains to Inverse that the map will include all of the incoming light in the universe as far as 10 billion years ago. The goal is to examine the structures that this map of light will reveal, the idea being that we can tell something about how the universe was created by the shapes that emerge.

“In this type of map, we’re not necessarily looking at individual galaxies, but the threads of light that are everywhere,” Farrington says. “You can think about pictures of Earth from space at night, where you can see the outlines of freeways.”

Scientists will use these maps for targeted investigations: Examining the history of galaxy formation over cosmic time, the role interstellar ices play in star and planet formation, and examining the process of inflation during the birth of the universe.

Because SPHEREx is mapping in infrared, it measure the distribution of galaxies by noting their positions and redshifts. Farrington explains that when we consider the universe expanding, we should think of it less as things racing away from each other, and more as space getting larger and larger.

“When that happens, when light is emitted from another galaxy, depending on how far away it is, its light gets redshifted,” Farrington says. “In other words, the light came out of a star at a certain frequency. The further away it is, the redder it gets.”

The hope is that varying redshift values will reveal that long-desired pattern of the universe. Some theories say that when the universe sprang into being, the mechanisms that drove then left an imprint pattern that could look like sponge or the stringiness of cotton candy.

“If it is like a ball of cotton candy, then there are lots of little threads and strings,” Farrington says. “As of now, we can tell from surveys that the structure of the universe looks kind of random. But mathematically, we just don’t know how random it is. That mathematical randomness is what can tells us whether the universe expanded because of one mechanisms, or another.”

It’s a mission designed to quickly and, in the world of space science, cheaply explain the first moments of the universes’ history — and an elegant exploration of the past, complimenting more future-minded missions, like the journey to Mars.

"A huge amount of science"

Linda Sparke, the Astrophysics Explorers Program Scientist at NASA, tells Inverse that the mission is right for the Explorer’s program because it can be relatively quickly but “delivers a huge amount of science,” in the end helping to reveal how galaxies, stars, and planets came to be as they are.

“We look at beginnings to figure out why things are now as we see them,” Sparke explains. “Looking at the early history of the universe is a way to test our ideas about how the galaxies are formed, why dark energy is pushing them apart from each other, and other things that we don’t yet understand. NASA is about exploration, and there’s no bigger scale to explore than the whole cosmos!”

For Farrington, it’s also an opportunity to work with an incredible team while influencing the history of space science.

"There’s nothing cooler than that, when you think, ‘Wow, I’m doing something for the advancement of knowledge.’"

“I’ve worked on different missions at the Jet Propulsion Laboratory for the last 20 years, in those years, I’ve seen my kids bring home science books from school containing information about missions I’ve worked on,” Farrington says. “There’s nothing cooler than that, when you think, wow, I’m doing something for the advancement of knowledge.

For the next four years, the team will be building and testing SPHEREx. In 2025, the last data will come through, and will be made available for any scientists who want to examine the massive trove of data. From there, we’ll find answers for the mysteries of the universe — as well as new questions that will push the boundaries of what it means for us all to exist.