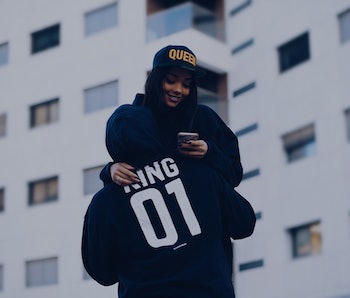 Ninety-five percent of Americans own a cellphone, and 77 percent of those devices are smartphones. That means that millions of people own one of the most influential pieces of technology ever released — an instantaneous link to millions of strangers around Earth. That ability to connect is a main perk of the product, but when it distracts us from the people we’re supposed to connect with in real life, it causes big problems. A new review argues this is the result of an “evolutionary mismatch.”

Maybe your date is more interested in checking their Twitter than watching your movie, or maybe your friends are more interested in checking Instagram than catching up. In a preprint paper forthcoming in the journal Perspectives on Psychological Science, psychologists from the University of Arizona and Wayne State University explain that these instances of “smartphone interference” shouldn’t be blamed on the notion that we’re uninterested in relationships. Rather, they stem from our intense interest in them.

We are extremely drawn to our smartphones because evolution hard-wired us to connect with others, they argue. To make this case, they present a review of the existing research on “technoference” — the study of technology’s impact on our relationships.

After analyzing the evidence, first author and University of Arizona psychology professor David Sbarra, Ph.D., is convinced that our intense desire to look at our smartphones is connected to evolution.

“The ubiquity of social media and the near-instantaneous rate of texting on the phone means that the furthest reaches of a social network are constantly cuing psychological processes — the desire to self-disclose and respond to others’ self-disclosures — that formed over the course of evolutionary history to maintain small intimate networks,” he tells Inverse.

As a consequence, Sbarra explains, we’re constantly pulled out of our in-person interactions and back into the virtual world. His paper raises the idea that what’s going on when we go into to this virtual world — that is, look at our phones when we’re with people — is an “evolutionary mismatch.”

In other words, the appeal of the smartphone is the same appeal that helped our ancestors form communities that were critical to their survival. Now, unfortunately, smartphone use can lead to real-life conflict: In one study cited by the team, 70 percent of 143 married women reported mobile phones frequently interfered with their relationships. That’s the evolutionary mismatch Sbarra’s talking about: A situation where an adaptive trait becomes maladaptive in a modern context.

Even the former vice president of user growth at Facebook, Chamath Palihapitiya, admitted to Stanford business students in a 2017 talk that he felt “tremendous guilt” because the “short-term, dopamine-driven feedback loops that we have created are destroying society.” Maybe that’s an extreme conclusion to draw, but it’s true that people feel destroyed without their phones: In one University of Bergen survey, 73 percent of adults said they would feel panic if they misplaced their device. In America, 26 percent of adults admit they are online “almost constantly.”

Sbarra points out that Facebook’s introduction of the “Like” button added a very powerful element to social media: “the ability to be responsive to others, which is a critical dimension of intimacy.”

The degree to which smartphone use disrupts the basic ability to maintain intimacy needs to be studied further. Sbarra and his colleagues are particularly interested in how romantic couples feel about the affect of smartphones on their relationships. A 2018 study published in the journal Psychology of Popular Media Culture, showing smartphone dependency was linked to relationship uncertainty and less relationship satisfaction, suggests the effect is not great. In that study, the problem with smartphones wasn’t that they hurt the health of the relationship. It was that individuals in the relationship felt a need to be constantly connected to their phone.

"When you’re with others, try to be with them and try not to get swept mindlessly into the world of social media.

The study, like Sbarra, suggests that there may be no problem with the technology in regards to relationships unless it’s a source of conflict. If one does feel like they or their partner has a problem with their phone, Sbarra suggests that setting limits at home can help — unless you both agree it’s cool to have a little phone time in a certain moment. The key is to be intentional with technology, not sucked in absent-mindedly.

“Bottom line,” Sbarra says, “when you’re with others, try to be with them and try not to get swept mindlessly into the world of social media.”