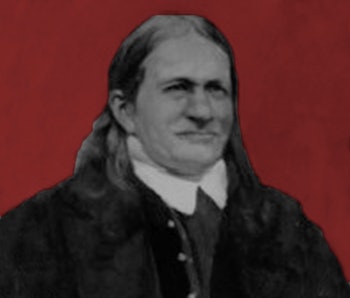 Friedlieb Ferdinand Runge, whose 225th birthday is celebrated in Friday’s Google Doodle, was a heavy hitter in the 19th-century chemistry scene. Though he passed away in 1867, his work is still around today.

As an analytical chemist living in Germany in the 1800s, Runge identified and isolated a few of the most medically significant alkaloids in history, which millions of people still use every single day, whether they realize it or not.

One of them, caffeine, stands out among the others, but quinine and belladonna alkaloids are arguably responsible for saving more lives.

The following three contributions to modern medicine are enough to make you wonder why you’d never heard of him before.

Runge is credited with the discovery of caffeine, which is by far his most famous achievement. Coffee had already made its way to Europe by way of Istanbul in the 1500s, but when the acclaimed writer Johann Wolfgang von Goethe gave him a bag of coffee beans as a gift, he knew what his next project would be.

He extracted the active chemical from the beans, initially calling it “Kaffebase.” So every time you drink so much coffee you start to feel like a killer robot, you can think of Runge.

Quinine is an alkaloid extracted from the bark of the cinchona tree, whose flowers are pictured above. This bark enjoyed a long history as an anti-malarial drug among the Quechua people in Peru, Bolivia, and Ecuador, and Europeans who came to South America in the 1500s noticed. Cinchona bark soon became a hot commodity for imperial powers, since Europeans were dying in droves from malaria as they tried to colonize the global south. With Peru tightly controlling cinchona exports, Great Britain, France, and the Netherlands went to great lengths to beg, borrow, and steal the valuable substance, even going so far as to smuggle seeds out. Some historians credit the spread of cinchona bark with European countries’ ability to sink their claws into West Africa.

During Runge’s career as a chemist, cinchona bark was already well known and widely used by Europeans, but it was mostly available as a dried powder. He is one of the first people credited with isolating quinine from cinchona bark, a crucial step in turning a botanical substance into a standardized drug. To this day, quinine still forms the basis of the anti-malarial drug Qualaquin, though various other drugs have since become part of the pharmaceutical repertoire in the fight against malaria.

Another one of Runge’s most famous discoveries, and perhaps the one with the strangest story, was yet another botanical ingredient. Belladonna, a member of the nightshade family, was long known as a poisonous weed that popped up in European gardens. In fact, it’s commonly known by the ominous term “deadly nightshade.” Instead of being afraid, however, Runge was intrigued.

A bizarre and perhaps unethical experiment, in which he dripped a belladonna extract in a cat’s eyes to dilate them, helped him realize that the alkaloids in belladonna, atropine and scopolamine, could be used to do the same in humans, too. While the belladonna extract was also used by some European women as a grim beauty trend, these two chemicals are still used in medicine today. Scopolamine is the active ingredient in some anti-motion sickness drugs, and atropine is still used to dilate patients’ pupils during eye exams as well as to slow heart rates during surgeries.

Despite Runge’s successes in the lab, business disputes later in his life eventually caused him to fade into obscurity. It’s only been after his death that he was recognized as the chemistry luminary that he was in life.