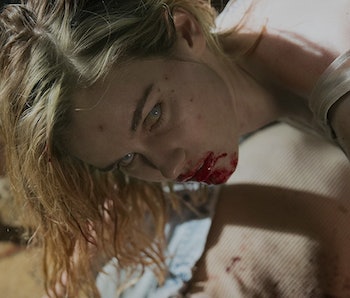 A shuffle. A scream. The lip-smacking scuffle as human flesh is feasted upon by one of the undead. Zombies limp, amble, and sometimes run rampant across the scrubby wastelands of our most revered media. Movies, books, comics, games, and TV shows thrive on our fear of being snacked upon by these unholy human descendants. There’s more to it than just being scared of having one’s body dismembered in an incredibly violent and painful way — the deeper message is one of overriding human anxiety.

And what better way to drive home that point than smearing our collective panic across every media platform. The zombie zeitgeist has held us in its grip for decades. Instead of pushing undead mythology farther into fantastical worlds, it edges closer to us with the likes of The Walking Dead. Its soon-to-be-released spinoff even pre-empts our fight-or-flight instincts with its title - Fear The Walking Dead. Both series show real, regular joes facing the unthinkable on a daily basis. There’s no gloss, no boyish antiheroes who twinkle when sunlight hits them. Rick Grimes and his survivors are the closest we’ve come to seeing ourselves engage the resurrected. It’s the pinnacle, in both comic and TV form, of the entire craze. It’s unlikely we’ll see another property achieve that same success for some time.

Why? Well, preying on our anxiety about the future in the most invasive way possible has now reached saturation point. The genuine fear stoked by the likes of George A. Romero’s Night Of The Living Dead has been replaced by a public who thinks zombies are cool. They’ll probably eat you while you’re still alive but hey — it’s AWESOME. Much like the nightmare-inducing sight of the vampire at the window of Salem’s Lot was overruled by Robert Pattinson’s neutered vamp leering through the glass at Bella Swan. Where will fear come from next?

Risk avoidance ranks high up on the priority list for any business anchored in creative endeavor. Movie studios in particular happily bind themselves into all-encompassing cinematic universes in the name of synergy; and ‘cause it’s far easier than dipping into something new. Monsters continue to pull in crowds - as evidenced by Godzilla, Jurassic World, etc - so the next tidal wave of terror may indeed emerge all behemoth-like, in a nod to the Kaijus from the glittery oceanic vulva in Pacific Rim, from other monster franchises.

Yawn. It’s not exactly zombies though, is it? A towering Indominus Rex or pissed-off kaiju is only accessible, and therefore, only a threat to the rich. Zombies eat anyone. Their affection is blind to your bank balance. They’ll gnaw on you regardless. Elsewhere, Universal is reintroducing all of its classic monsters into a new cinematic universe that began with the awful kinda-prequel Dracula Untold and continues with the umpteenth reboot of *The Mummy in 2017. Yeah, The Mummy, Frankenstein, and The Wolfman are more on the type of bipedal humanoid scale required for an intimate one-on-one level of fearmongering… but unless they’re storming the world in armies, they don’t carry the necessary power.

Time travel has the potential to keep us in check. Don’t piss about otherwise, it’s a swift trip to the Chronopod and back to last year for you! But it too is exhausted. We’ve watched as cyborgs stepped forward from the past to obliterate mankind, and we thought it sucked. As a concept that’s still not within the grasp of human capability, we’re so at home with it and the methods of its functionality that it’s become just another device to weave into a story. This fact is a shame because it addresses two of the biggest anxieties people stress over: regret for the things we’ve done, and worry for the things we probably won’t. The difference between a zombie and time travel is of course that the former is an actual physical being that needs to be stopped before it stops you, while the latter is too subtle of an allegory to stir up pant-browning terror. Likewise for alternate universes and portals. All so unknown and yet all so familiar.

What if we’re looking in the wrong places for that Other thing to rally against? Creators of some of the finest sci-fi and horror masterpieces, literary or otherwise, have looked to the future to keep us fearful and subservient. Philip K. Dick and Robert Heinlein forged careers out of making the future appear inhospitable to contemporary life. But modern living is already pretty hellish depending on your circumstance. In 1999, the idea of people wanting to escape the shitty reality of life permeated tons of pop culture through sci-fi titles like The Matrix, The Thirteenth Floor, eXistenZ, and dramas like American Beauty and Being John Malkovich. Everyone wanted out. Sixteen years later we’re still pushing at that boundary - albeit it’s now a chain-link fence with an army of walkers on the other side. Tear down that divide separating us from the fictitious monsters, ghouls, and robots, and all we’re left with is a twisted, skewed version of ourselves. Think of it like the part in Jedi when Vader’s true form is revealed.

So forget your bleak dystopian portraits of a wasted Earth, populated by characters in skin-tight costumes and inspirational brooches. The “not-so-distant” futures that are just a shade away from our lives now — except everyone shags robots retrieved from vending machines. The only thing to fear isn’t the unknown, or creatures or even fear itself. It’s people!

Whatever you may think of True Detective, it can’t be denied that it has shown unrelenting dedication to presenting the human experience as a grimy mess that should be flushed down God’s toilet. The Hellmouth is already here, folks (and I’m not just referring to the show’s lackluster second season.) Even The Walking Dead pulls most of its dramatic tension from interactions between different sects of survivors, viewing the walkers as an annoyance that only gets in the way from the meatier threats. Wayward Pines’ dystopia time-jumped 2000 years forward, where the threats known as Abbies are the result of human evolution gone awry. Amazon’s The Man In The High Castle (a Dick adaptation, no less) is an alternate history tale, set in the aftermath of WW2 with parts of the U.S. under Nazi occupation. Now there’s something to be truly afraid of.